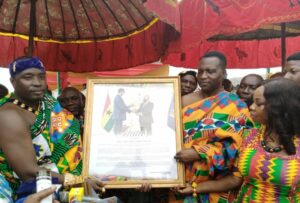 The initiative, according to him, would further eliminate barriers to tertiary education, one year after the introduction of the “no guarantor policy” in accessing student loans.

Speaking at a durbar held in honour of Dr. Yaw Osei Adutwum, the Minister of Education by the Chiefs and people of Bosomtwe, the CEO said the initiative was one of the innovative ideas of the Minister.

Dr. Adutwum, who is also the Member of Parliament (MP) for Bosomtwe was celebrated at the durbar for his immense contributions to the development of the constituency.

Attended by virtually all the chiefs in the Constituency, youth groups, students, and other stakeholders in education, the Education Minister was rewarded for his transformative leadership of the Ministry and the impact he was making in the education sector.

The CEO of the SLTF said with the intended initiative to allow SHS students apply for loan ahead of their admission, transition to tertiary institutions in Ghana was going to be the smoothest in the sub-region.

He, however, clarified that the loan would only be given to students who successfully gain admission, adding that the move was to encourage students to progress to tertiary institutions without having to worry about tuition fees.

He paid glowing tribute to the Minister for repositioning the Fund for effective service delivery, saying that the impact on Ghanaian students would be immeasurable once the new policy took off.

The Education Minister, he said, was a national asset and urged the people of Bosomtwe to cherish and support him to transform Ghana’s education for the benefit of present and future generations.

Dr. Adutwum thanked the Chiefs and people of Bosomtwe for the honour done him and promised to do more to justify the confidence reposed in him by his constituents who offered him the opportunity to serve Ghanaians.

He said without the support and wise counsel of the Chiefs and other stakeholders, he could not have achieve anything and called for their continuous support to push the development agenda collectively.

He pledged to serve the interest of the people of Bosomtwe at all times as their representative, saying that the love shown him was enough motivation to work even harder.

Nana Opoku Amponsem II, the Chief of Abrankesse Nyameani, on behalf of the Chiefs presented a citation, assorted Kente and a ram to Dr. Adutwum in appreciation of the significant impact he made since becoming their MP.

Government has achieved a lot despite teething challenges – Bawumia