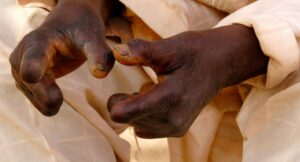 The National Leprosy Control Programme (NLCP) says it has intensified contact tracing for people exposed to leprosy to aid the fight against the disease in the country.

Dr Benedict Okoe Quao, the NLCP Programme Manager, said this was important because if cases were not found early and treated promptly and completely, affected persons could develop disability.

The Programme Manager was speaking at a national stakeholder meeting on leprosy contact tracing and post-exposure prophylaxis guidelines.

Dr Quao said contact tracing for leprosy was of grave concern as the disease could cause permanent nerve damage leading to disability.

He said leprosy was a disease of the skin and nerves caused by a germ called Mycobacterium leprae, which was in the same family as TB and Buruli Ulcer.

He explained that even though the disease could spread from person to person it could be cured, and disability prevented.

“By preventing physical impairments and disability we can cure persons affected by leprosy with no evidence of ever being infected with leprosy,”he said.

Dr Quao said as part of efforts to ensure that Ghana achieved Zero-Leprosy by 2030 a Planned inauguration of Zero Leprosy Action Plan & National Partnership would be held in 2023 on World Leprosy Day.

He, thus, urged the public to seek early treatment for skin diseases that had refused to go after some time as it could be leprosy.

Contact tracing helps to control diseases that can spread from one person to another and involves identifying persons who have been exposed to someone with an infectious disease and are likely to also develop the disease.

Ms Victoria Nyarkoh, Pharmacist, NLCP, speaking on the role of contact tracing, said it would help reduce and potentially stop ongoing transmission of leprosy in communities.

She said contact tracing in the past helped in controlling diseases such as influenza, TB, Yaws and COVID-19.

The Pharmacists said strengthening of existing contact tracing coupled with providing preventive chemotherapy for leprosy contacts promised to be the game-changer in the fight against the ancient disease.

Ms Nyarko called for newer tools to achieve zero-leprosy by 2030 even faster.

Dr Francis Kasolo, the Country Representative of the World Health Organisation (WHO), in a speech read on his behalf, said close contact with cases of leprosy, particularly in poor environmental conditions, had been found to be the main drivers of the disease.

He said based on that WHO had made recommendations for the strengthening of surveillance and active case detection.

Mr Kofi Nyarko, Survivor of Leprosy, called for public education on the disease to help in the elimination process.