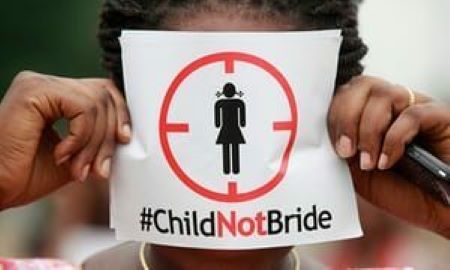 On June 15, 2022, Alhassan Fuseini (Not real name), a 50-year-old man, forced a 15-year-old girl into marriage because his 10-year marriage to his 26-year-old first wife had not been blessed with any child and he wanted to have children.

However, even though his first wife consented to him taking on a second wife, she did not expect that he would bring home a child as a co-wife! The couple’s dilemma had been made worse.

Seven years ago, Imam Ismail Mumuni (Not his real name) also married off his 14-year-old daughter Hajara (not her real name) as a second wife to his friend Yusuf at Elubo in the Western Region of Ghana. She was only in Primary Five when her father married her off.

In the same neighbourhood, 14-year-old Ayisha Ibrahim was married off by her father who was afraid that she would be pushed into pre-marital sex to avoid the poverty the family has endured since she was born.

The three girls are representative of the over two million girls whose education is abruptly ended when they are married off due to religious, cultural, and misplaced fears that communities in Ghana still have.

Child marriage is any union either formal or informal, where one of the parties is under 18 years old is prohibited by law. Indeed, such marriages are considered a violation of human rights.

The data also indicates that more than 700 million women alive today were married before their 18th birthday.

This is equivalent to 10 per cent of the world’s population (approximately 7.25 billion currently) six with around one in three (about 250 million) entering into the union before the age of 15.

Children such as Hajara and Ayisha are denied an opportunity to enjoy their childhood, they are denied their right to education and the right to choose when and whom to marry. The public health implications for child marriages are enormous, contributing to the high maternal mortality rate, increasing the risk of sexual and gender-based violence, and increasing poverty and other socioeconomic challenges.

In some regions, the conflation of cultural and traditional practices with Islam has led to cases where imams condone child marriage, even though it is contrary to Islamic teachings.

Sheikh Armiyawo Shaib, the spokesperson for the Chief Imam of Ghana, in an interview with the GNA said, in Islam, child marriages are prohibited.

“Even though the Quran does not fix the age of marriage, it does not support the marriage of a girl who has not attained maturity,” said Sheikh Armiyawo. 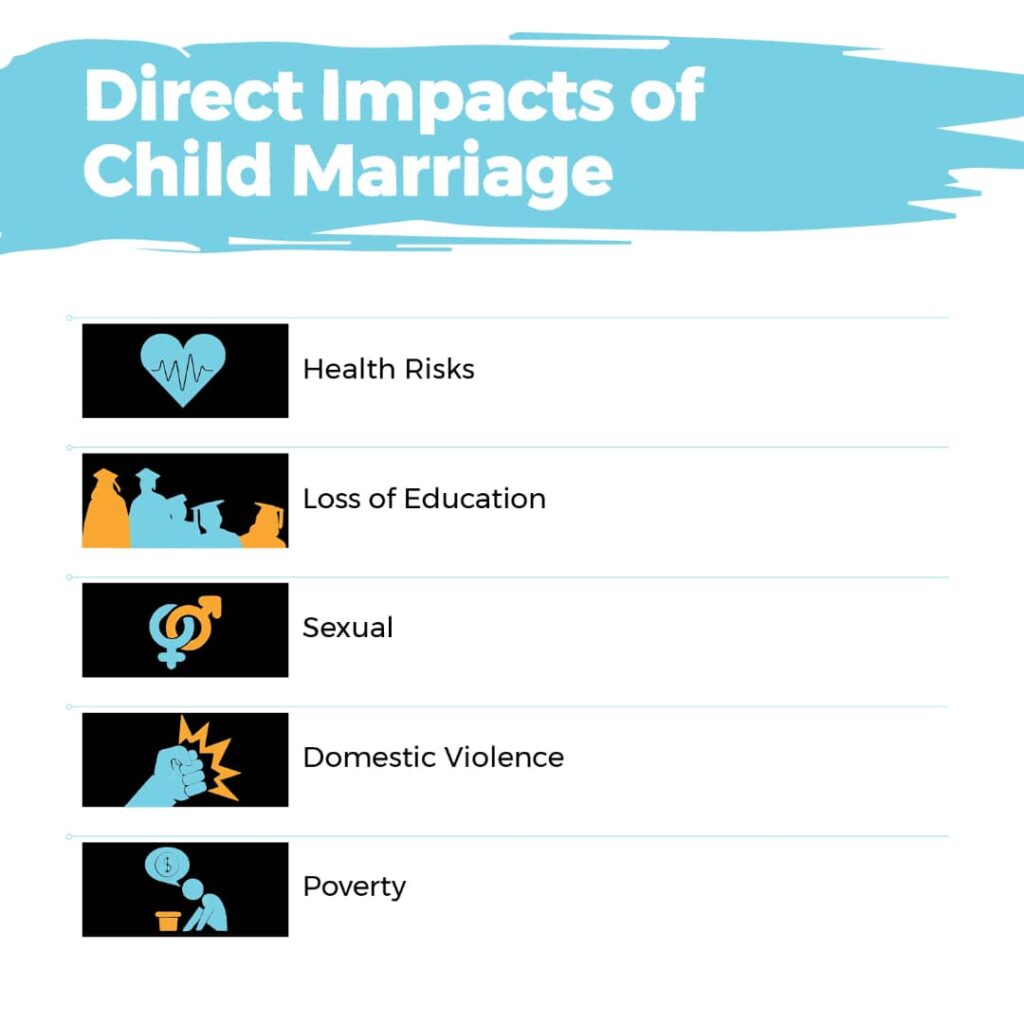 According to the hadith, the collected traditions of Prophet Muhammad (PBUH) based on his sayings and actions, the Prophet got married to Ayisha (r.t.a) when she was only six years old, but he consummated the marriage when she had reached the age of maturity. Maturity according to the hadith is the age of majority which is equated with attaining puberty and demonstrating adequate mental development.

Sheikh Armiyawo explained that when Ayisha (r.t.a) was betrothed to the Prophet (PBUH), she was handed over to Khadijah for training. The marriage was consummated when she reached the age of 18-19 years. According to Sheikh Armiyawo, a girl betrothed at an early age is not expected to live with her husband until she is fit for marital sexual relations (hata tutilqal-rijal).

“Betrothal can happen at any age, actual marriage comes later after attainment of puberty and sound judgment,” he said.

He explained that one of the conditions for giving a girl’s hand in marriage is her ability to consent to such a marriage.

“For a marriage to be established in Islam, there has to be a proposal and acceptance (al-Ijaab waalqubuul); there has to be approval by both parents (ridaa waalidayn), there has to be payment of a dowry by the groom (al-mihr) and there have to be at least two male witnesses at the ceremony (shaahidayn ‘aadilayn).

“It is only after the bride attains maturity, or sound judgment, to handle her own property that she can receive her dowry; (Mahr). Without dowry, no marriage is established,” he says.

For the marriage to be accepted, the woman has to first accept the dowry as a symbol that she has consented to it. However, in practice, parents often take the money without the knowledge of the girl, due to poverty. The girl only gets to know after everything has been concluded, when she is told a man has come for her hand in marriage and she is prepared to be taken to her husband. In such cases, the parents believe that the girls will be taken care of by the well-to-do men.

As in the case of Ayisha Ibrahim, who was married off at the age of 15, child marriage only entrenched the cycle of poverty. She told the GNA that her husband did not take care of her.

“I had to rely on my father to send me money to take care of my children and myself,” she said, adding that, she had to leave with her children after 25 years of frustration.

In some instances, the marriage is tied in the absence of these girls but in the presence of two witnesses (father and mother or uncles and aunties) from both sides and an Imam.

“There has to be a consensus to clear all the misconceptions. This kind of awareness should also target imams and Islamic teachers,” he said.

It is important to note that the drivers of child marriage in Muslim communities are by no means different from happenings in Christian communities. 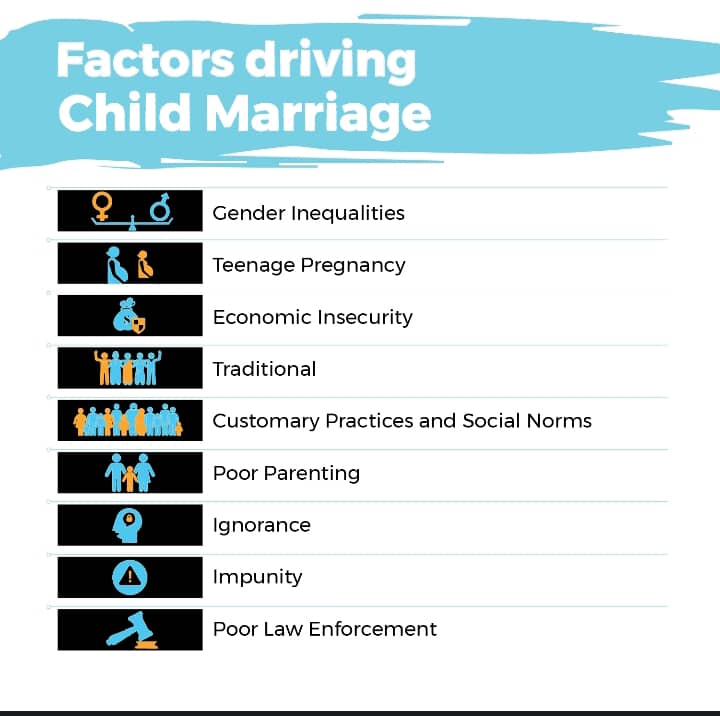 Child marriage rates are high in some regions, despite being prohibited by the Children’s Act (Article 560), which states that no person shall force a child: to be betrothed, be the subject of a dowry transaction, or be married, and the minimum age of marriage shall be 18 years.

Nationally, the Ministry of Gender, Children and Social Protection established a Child Marriage Unit in 2014 to promote and coordinate initiatives aimed at ending child marriage. Various non-governmental organisations also implement initiatives to fight child marriage. They include the Zakat and Sadaqa Trust Fund, which provides scholarships and other support to families who may be inclined to marry off their daughters due to poverty. The initiative backed by the Muslim Caucus and Staff of Parliament led by the National Chief Imam, Sheikh Doctor Osmanu Nuhu Sharubutu, provides families with food, shelter, education, health, and economic empowerment training.

“Providing skills training to girls who are at risk of child marriage, keeping the girls and boys in school through scholarships and the provision of free senior high school education, are just a few interventions that can encourage communities to break the cycle of early marriage,” said Sheikh Armiyawo.

“If there is an incident of child marriage, the flag flies at half-mast until the child is rescued by the chiefs and police and reunited with the family. It is only when the child goes back to the parents and the marriage is annulled that the flag is hoisted again,” said PPAG Executive Director Ms Abena Adubea Amoah.

Children are also taught strategies to protect them from early marriage and to report child marriage to institutions such as the chiefs, the Police, the Commission for Human Rights and Administrative Justice (CHRAJ), the Domestic Violence and Victims Support Unit (DOVVSU), the National Commission For Civic Education (NCCE) and the Ghana Education Service.

Madam Khadija Yakubu (not her real name) told the GNA, that as a result of the campaign, when her 12-year-old daughter became pregnant, she did not marry her off to the man responsible as planned.

“I would rather have her deliver and return to school to be responsible in future,” she said.

Since the campaign was launched in 2021, six adolescent girls have been rescued from child marriage by the chief in collaboration with the police and DOVVSU in the community.

Despite these efforts by various national and international organisations, the signing of international resolutions and the enactment of national laws, child marriage in Ghana remains a concern. There is limited evidence that programme interventions to deal with the practice have made a dent on the practice.

This article was produced with the support of the Africa Women’s Journalism Project (AWJP) in partnership with the International Center for Journalists (ICFJ) with support from the Ford Foundation.