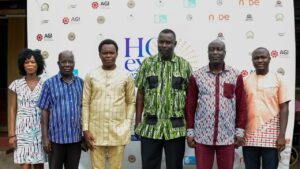 Mr. Divine Bosson, Ho Municipal Chief Executive (MCE) has said the city should be considered for elevation to a Metropolitan status.

He said the population of the Volta Regional capital had exceeded the threshold for metropolitan consideration, noting that about 100,000 of its residents were unmarked during the 2021 housing and population census.

The census placed the city’s population at 197,500 and the MCE, who was addressing leaders of the Volta and Oti Chapters of the Ghana Journalists Association (GJA), who had called on him, said the count missed a sizable chunk.

Mr. Bosson said the unmarked included workers, and the growing student community that were counted elsewhere yet spent critical time in the city, and that the number could not be ignored in development planning.

“The Municipality is ripe. We are more than a Municipality status and am sure when the President is granting statuses, he will consider us,” he added.

Mr. Bosson noted that the Municipality’s growth showed in the fast-evolving physical landscape, and that the Assembly was working to expand its structures to par.

The Municipality in recent times has witnessed a boom in development with the establishment of the nation’s prime health university and increased local investment drive.

The MCE, who is barely a year into office had attempted a series of successful ambitious city expansion initiatives, opened roads, and led a sustained sanitation effort.

The MCE said encouraging business investment was part of the Assembly’s strategies towards development and would seek to support the enhancement of potential growth areas, which includes the real estate, agriculture, and tourism sectors.

The Municipality would this year hold the maiden Ho Expo, focusing on promoting tourism, real estate, and investment, and which the MCE said would expose the potentials, and help stimulate business and development collaboration among the private sector and other stakeholders.

Mr. Bosson observed that the real estate remained top of the investment chain, especially with the academic community stimulating focus on urban accommodation and hinted on plans to revisit a 200-unit Spanish housing project for the Municipality, aborted preliminarily in 2011.

He said internal revenue was crucial to the city’s ambitions, and that the Assembly had begun a crusade on clogged revenue streams including property rates, 90 per cent of which had never been paid.

The MCE appealed to the Ghana Revenue Authority (GRA) to mainstream the collection of rent taxes by law to boost revenue streams for government and development purposes.

Mr. Emmanuel Agbaxode, Chairman of the GJA, said the media sought to strengthen development collaboration with the various stakeholders, and assured the Assembly of continuous support.