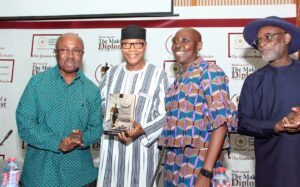 The memoirs of the late Alexander Quaison-Sackey, Ghana’s former Foreign Minister and the first African to serve as President of the United Nations (UN) General Assembly, has been launched in Accra.

The event was organised by the Council on Foreign Relations Ghana, in collaboration with the family of the late Quaison-Sackey.

The book, which was completed and edited by Madam Awo Aferba Quaison-Sackey, daughter of the author, is a thrilling – albeit incomplete – life story, elegantly written.

Starting from the author’s elementary school days at his birthplace, Winneba, in the Central Region, where he obtained a distinction certificate at the Standard Seven School Leaving Examinations, the book takes the reader through Quaison-Sackey’s sojourn at Mfantsipim Secondary School where he became the Senior Prefect in his final year through to Achimota College, where he became President of the Students’ Christian Movement.

It also highlighted the author’s study through Exeter College Oxford University, where he served as President of the West Africa Students’ Union through his years as a Labour Officer in Ghana, his training as a pioneer career diplomat followed by a two-year stint as Head of Chancery in the Ghana High Commission in London.

That was followed by his appointment as Ambassador and Permanent Representative to the UN where he made history by becoming the First Black African to assume the Presidency of the UN General Assembly.

The greater part of the book gives an exciting and insightful bird’s eye view of the author’s exertions at the UN during his tenure as Ambassador and Permanent Representative on then burning issues as Decolonisation, the Congo Crisis, Apartheid in South Africa, the Cuban Missile Crisis, Arab-Israeli Conflict and the UN Financial Crisis of 1964, which nearly paralysed the world body.

The book, published by Digibooks Gh. Limited, ends with the author’s post UN appointment as Foreign Minister of Ghana, his later incarceration and subsequent release, which enabled him to proceed to London to complete his law studies.

Those achievements made him a Ghanian trailblazer in international diplomacy for “many of us to follow in later years.”

“He was a pioneer who projected the African personality on the international scene and demonstrated that if given equal opportunity, Africans could perform creditably just as well as others.”

“He was a household name in Ghana because of his highly successful career at the UN in New York, and a huge source of pride and inspiration to the students of my generation,” Dr Chambas said.

Touching on Decolonisation, he said Ghana used the platform provided by the UN to push for the decolonisation of the rest of Africa.

“Alex Quaison-Sackey and his colleagues were in the vanguard in mobilising the Afro-Asian and Latin -America delegations at the UN to support the passage of, for instance, the declaration on the granting of independence to colonial countries and people.”

“This set the tone for the fight for independence, the Liberation struggle and the anti-apartheid struggles on the African Continent”.

Madam Quaison-Sackey lauded Mr Kabral Blay Amihere and Mr Daniel K. Osei, Vice President and President respectively of the Council on Foreign Relations Ghana for encouraging and supporting her to come out with the book.

Mr Osei, on his part, commended Madam Quaison-Sackey, also a member of the Council, for coming out with her father’s memoir.

He hailed the quality of training Ghanaian diplomats underwent in the early post-independence era prior to their assumption of duty.