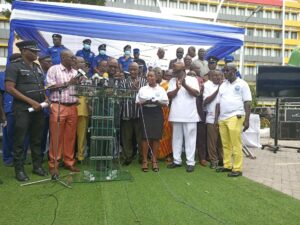 The initiative, which would be implemented by the Road Safety Management Services Limited (RSMSL), would ensure that disabled GPRTU vehicles were towed off the road at an annual fee.

Under the arrangement, taxis would pay an annual fee of GH¢50, whereas mini-buses (trotro) would pay GH¢80. Buses and heavy-duty trucks would pay GH¢300 and GH¢500 respectively.

The GPRTU on Tuesday, August 9, 2022, launched a mobile application (APP) that would capture the details of all drivers and their vehicles and facilitate the operationalisation of the service.

Mr Godfred Abulbire, the General Secretary of GPRTU, told the Ghana News Agency that the Union was targeting 2.6 million vehicles.

He said the tow levy had become necessary in the wake of the increasing rate of road accidents, some of which were as a result of abandoned disabled vehicles on the road.

He said the Levy was compulsory for all drivers, adding that members who did not subscribe to the service would not be allowed to operate at the Union’s terminals.

He said members who would subscribe to the service would be issued unique cards that would make them eligible to benefit from the service.

“All our members will have to subscribe through the App. They will put in their details (name, phone number, car number and car type), then they will pay the fee…When the vehicle breaks down, they will call a toll free number and they will come and tow it,” he said.

He added that: “If any driver does not subscribe to the App, we will make sure he will not get access to the loading within all our terminals.”

Superintendent Dr Samuel Sasu-Mensah, the Director of Operations at the Motor Traffic and Transport Department (MTTD) of the Ghana Police Service, welcomed the initiative and urged drivers to comply with road traffic regulations to reduce road crashes.

He said between January and July this year, the MTTD recorded a total 8,869 road crashes out of which 9,218 victims were injured, and 1,433 died.

“Out of the total number of deaths recorded so far, 496 of them were commercial drivers,” Supt. Sasu-Mensah said.

He said the Authority would engage the GPRTU before implementing any policy in the sector to ensure full compliance.

The government in 2017 planned to introduce a mandatory tow levy, but the move was stopped after widespread public outcry particularly by transport operators ,which now seeks its reintroduction.

The government explained that the suspension of the Levy was to allow for broader consultation among stakeholders to secure their support.