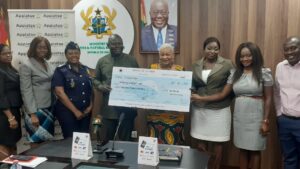 The Ghana Revenue Authority (GRA) on Monday donated GH¢50,000 to the Appiatse Support Fund to help in the reconstruction of the community.

Mr Dominic D.Naab, Assistant Commissioner and Technical Aide to Reverend Ammishaddai Owusu-Amoah, the Commissioner-General of GRA and a team from the Communications Department, presented the cheque to Reverend Dr Joyce Aryee, Chairperson of the Fund.

Mr Naab said the donation formed part of the Authority’s Corporate Social Responsibility and to complement Government’s efforts to rebuild the community after the disaster.

He stated that even though the GRA was an entity to mobilise revenue for socio-economic development of the country, the Authority was also keen in responding to the needs of society during disasters.

He said having heard of the Appiatse disaster, the Authority which was a socially responsible organisation thought it prudent to contribute its “widow’s mite” to support the affected communities.

“The Appiatse community are our taxpayers and the gesture is to demonstrate that we care for them in this difficult time,” he said.

He called on other corporate institutions to support the Fund to meet its objective of rebuilding the collapsed community and bringing respite to the victims.

Rev Aryee commended the Authority for the gesture, stating ” We are delighted to know that you do not only take revenue but you give as well.”

She said the Fund had so far raised an amount of GHS 45 million out of the required minimum of GH¢70 million for the reconstruction project.

Rev Aryee commended the Appiatse Reconstruction and Implementation Committee for the state of work, stating that companies like Glico Group, Vodafone Foundation and others have pledged to construct modern market, community centre and other services.

The Government on January 26, 2022, launched the Fund to help in the rebuilding of the community, as well as the rehabilitation of persons affected by the explosion that occurred at Appiatse, a community near Bogoso in the Prestea Huni Valley District in the Western Region.

Thirteen people died and many others sustained injuries when a truck carrying explosives to a mining site exploded in the town.