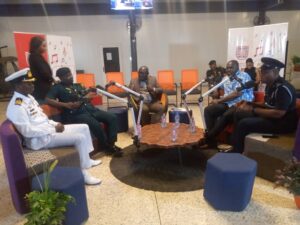 Security agencies in the country have urged students to be security alert and report any suspected threats of terrorism in their lecture halls and internet spaces.

They said insecurity had increasingly become a major problem in the Sahel region as terrorists continued to perpetrate attacks, where people mostly congregate such as schools and churches.

These Agencies, comprising of officials from the Ghana Immigration Service, Ghana Armed Forces, Ghana Police Service and National Security, made the call during a students’ forum, where issues of activism and terrorism were discussed.

The forum which was dubbed: “Fire Side Chat” was organised by Academic City Radio of Academic City University College in collaboration with Asaase Radio to sensitise the students on their role in curbing the menace.

The initiative is in line with the See Something, Say Something Campaign launched by the National Security.

Chief Superintendent Mr Michael Amoako Atta, the Public Relations Officer, Ghana Immigration Service, said any attacks in schools and halls would not only halt school activities but might destroy lives and properties.

“I will appeal to you students that when you see things that are not normal in your communities, hostels and lecture halls, do not just see it but say something,” he said.

Commander Philip Odoi-Narh, the Acting Director, Strategic Intelligence Department of Defence Intelligence, Ghana Armed Forces, called on the students to be vigilant of enticement and recruitment on the internet.

He said in building national cohesion and country resilience, it was important that the actions of all citizens, including international students, help to build the needed resilience against the threats.

He also cautioned the students to never congregate at the scene of an attack or assume responsibility for citizen journalists in the quest to video and broadcast the incident.

“We should not just be quick to do that, normally in a complex attack by terrorists, the first incident will just be to get people together so that they can now initiate the real attack,” he added.