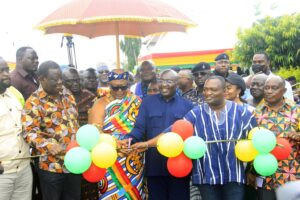 A total of 1,180-kilometre of road projects have been executed in the Ashanti Region since 2017, the Vice-President, Alhaji Dr Mahamudu Bawumia, has said.

The projects, according to him, cover highways (264 kilometres), urban roads (495 kilometres) and feeder roads (421 kilometres), all constructed under the auspices of the Ministry of Roads and Highways.

Alhaji Dr Bawumia said the projects were a manifestation of the government’s resolve to boost socio-economic activities given the critical role road infrastructure played in the country’s development.

He was speaking at the inauguration of rehabilitated roads and auxiliary infrastructure under the Kumasi Inner Ring Road and Adjacent Streets Project, at Nsenie, in the Oforikrom Municipality.

The scope of the project, undertaken by Messrs. Contracta Construction UK Limited and commenced in December 2019, included the construction of drains, culverts and road rehabilitation works.

Alhaji Dr Bawumia indicated that the road projects were in line with the vision of the government to provide an integrated urban transport system responsive to the needs of society.

He bemoaned the poor nature of roads that existed in the region until the New Patriotic Party (NPP) was voted into power, explaining that this did not augur well for the people, especially workers, traders and drivers who commuted those roads.

Touching on the construction of the 30-kilometre Anwiankwanta-Obuasi road, the Vice-President hinted that the project was about 70 per cent complete, and also, plans were far advanced to commence the Suame Interchange Project for the benefit of the people.

Otumfuo Osei Tutu II, the Asantehene, in a speech read on his behalf, lauded the government for the bold initiative to put roads in the Region in good shape.

The projects, according to him, would help alleviate the plight of the people as they commute the roads for their various businesses.

Mr Kwasi Amoako-Atta, the Minister of Roads and Highways, said the road rehabilitation project was critical in improving accessibility in all areas of the Kumasi metropolis.

He advised the people to endeavour to take good care of the projects to enhance their longevity.