Passengers stranded as drivers go on strike for three days 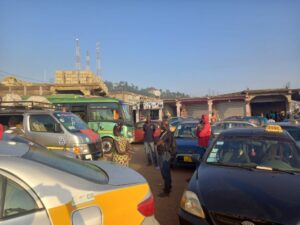 Taxi drivers, who ply the Asankragwa-Bawdie road in the Wassa Amenfi West Municipality and Wassa Amenfi Central District in the Western Region, on Thursday began a three-day sit-down strike over the deplorable nature of the road.

According to the drivers in Asankragwa, Bawdie and Bogoso, their decision to protest was as a result of the government’s deliberate failure to fix the road.

When the Ghana News Agency (GNA), got to the Asankragwa station at 1000 hours, stranded passengers who were determined to get to their destination were disappointed.

Mr. Bismark Acquah, a leader of the drivers in Asankragwa, confirmed the strike to the GNA, pointing out that the road had been deplorable for years.

“We cannot continue to risk our lives driving through this dangerous road. It is even worse when it rains. We have decided not to sit down unconcern and watch while roads in other areas are being constructed,” he lamented.

He continued: “This road had developed lots of manholes and is dusty. Every week we have to send our cars to the mechanic for maintenance, buy spare parts, most of our cars have broken down and we go home with no money.”

Mr. Acquah stated that although the Municipal Chief Executive for Wassa Amenfi West Municipality, Mr. Lord Nana Tandoh, came to plead with them to call off the strike, he did not give them any assurance as to when the Bawdie- Asankragwa road would be constructed.

“If we agree to call off the strike and nothing is done to improve the state of the road by Tuesday, July 26, 2022, we will strike again,” he warned.