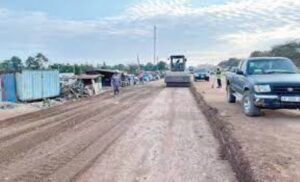 Mr. Kweku Attakow Diafo, Resident Engineer, La Beach Road Project, has hinted that the delayed payment of compensation has been a major cause of delay in the completion of the project.

He explained that the project, which began in 2020 and expected to be completed in June 2022, has been delayed because of delayed payment of compensation to affected persons in Teshie whose structures had to be pulled down to make way for the road.

“Some affected persons are yet to be compensated to give way for the construction.

Speaking to the Ghana News Agency, Mr Diafo said the compensations were handled by the Land Valuation Department of the Lands Commission. “They will do the assessment to be presented to the people. So as soon as they do that and the people receive their compensation, we will fast track our work.”

He also indicated that the completion date for the project has been extended to February 2023.

“Resources have been increased in terms of manpower, equipment and finances to enable us complete the project within schedule,” the Resident Engineer said.

He said that the initial work plan which was supposed to be extended to the Independence Square in Accra was reviewed adding that the project would end at Osu Ako Adjei, Kingdom Books and Stationery.

Mr Diafo explained that the $46.8 million allocated for the project was not enough, a major reason why it would not be extended to the independence square.

“There has been a slight change from the original size of the design due to unavailability of funds,” he added.

The Resident Engineer said the project when completed would have three bridges, and three lanes per carriageway. Two to take care of the traffic situation with the third lane being a service road to junctions, bus stops and other parts of the township.

“Presently, in some places, we are doing three lanes per carriageway because of the traffic build-ups, in some places, we have added service roads that serve the community and the public transport operators that would want to branch off to junctions and houses.”

He noted that residents as well as shop owners operating along the stretch have so far been cooperative.

Meanwhile, some residents of Teshie have complained that the new culvert at Teshie Adoemli as part of the construction was inappropriate.” The size of the culvert is not large enough to contain the huge volumes of water, from adjourning smaller drains anytime it rains, causing flooding of houses along the stretch.”

Mr Kotey Dzani, a resident of the area told the GNA that he has not experienced any flooding situation for the past years. However, with the reconstruction of the culvert, he now experiences serious flooding anytime it rained, a situation he described as disturbing.

“Previously this place was not like this. We did not experience flooding here until this culvert was poorly constructed. It will cause serious problems if nothing is done about it,” Mr Djani.

Mr Asafoatse Yenkuyena, also a resident in the area, had six of his public bath houses along the gutter collapsed, due to the huge volume of flood water that the new culvert could not contain. “I have lived in this community for 40 years. I haven’t seen floods in my house before”.

The residents said another bridge also under construction near A. Life junction on the same stretch was much better and called on city engineers to address the issue to bring comfort into the community.

Reacting to this, the Resident Engineer said although the culvert was standardized and much bigger than the previous one, the problem was beyond it.

To this effect, an analysis has been made to be submitted to the hydro department under the Department of Urban Roads for onward solution.

Meanwhile, the construction workers have also complained about inadequate payment, claiming they were promised between GHC 70 to 80, but were currently marked  GHC 25 daily.

Mr Diafo, also debunked complaints by the construction workers about inadequate payment, saying the issue has not been brought to their notice and promised to act it gets to his outfit.