Institute of Foresters concerned about disappearance of Ghana’s urban forests 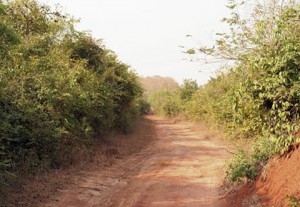 Urban Forest reserves in Ghana are threatened by infrastructural aspirations as towns and cities continue to expand with many more transitioning into the urban precinct and becoming subject to the infrastructural development.

“There is consensus among development experts that development is only truly sustainable when it also addresses social and environmental concerns, therefore, actors who encroach on urban forests for infrastructural aspirations must consider the broader sense of development.

Professor Professor Samuel Kingsley Oppong, President, Ghana Institute of Foresters (GIF) stated this in a paper to the Ghana News Agency in Tema and noted that “our urban areas continue to have an increasing number of vehicles being mostly fossil-fuel powered, these vehicles emit polluting fumes into the urban air.

“Even though urbanization can increase the economic value of land so much that it could look economically irrational to continue to have such high-value lands under uses that do not generate substantial economic returns, human existence also depends on the environment.

Prof. Oppong expressed concern about the rapid rate at which the country was losing its urban forest, citing only one of the many environmental services that urban forests provided as vital air cleaning mechanism.

“You may have heard of instances where people have died from fume inhalation because they left their generators working inside their rooms, while asleep for fear of theft.

“The fumes that the many cars in our urban environments emit on daily basis are not good for us but the average car user is not really bothered about the fumes from his or her car, because even the visible dark smoke from badly maintained cars appear to disappear once it gets emitted into the urban atmosphere”.

Prof. Oppong explained that the fumes do not simply disappear, it merely diffuses into the urban atmosphere and form part of the urban air we breathe, stressing that “we do not suffer the fate of the persons who keep running generators inside their rooms because the emissions do not cause much harm to health, when the concentration in the urban air is kept within limits.

He said urban forests are indispensable in the process to keep the concentration of vehicular emissions in the urban air within limits, “it is in our interest to protect the urban forest”

Prof. Oppong said Kumasi city once had the Kumasi Forest Reserve, but it had completely been whittled away for infrastructural development.

He said royalties derived from it can be paid to the owners so that it becomes a win for every interest in the land, air quality, public space for leisure and other activities, ecotourism, biodiversity conservation, Ghana as a nation, and indeed the world at large.