Tramadol is most abused drug substance in Ahafo region – Commission 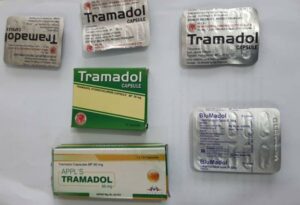 Mr Kofi Boateng, the Ahafo Regional Director of the Narcotics Control Commission (NaCoC), has disclosed that tramadol is the most abused substance by the youth in the region.

According to him, raw cannabis (marijuana or Indian hemp), cannabis toffee, cannabis biscuits and cannabis mixed with alcohol, locally called ‘laka bitters’ were some of the substances abused in the region, but “tramadol abuse is the top-most.”

Mr. Boateng was speaking in an interview with the Ghana News Agency at Bechem in the Tano South Municipality of the Ahafo Region, explaining that ‘‘though tramadol is not a narcotic drug, its effect is high, especially for those who consume 120mg, 250mg and 500mg doses”.

He said ”one alarming issue is the abuse of drugs by ‘okada’ (motorbikes) and ‘aboboyaa’/ ‘Pragya’ (tricycle) riders in the region,” saying the net result could be road crashes caused by such riders.

Mr. Boateng said his office had realised cannabis cultivation was not common in the Ahafo region, saying because of that “it is difficult to find and also if found, it is expensive to afford.”

He said due to that most of the youth resorted to the use of tramadol to offer them the strength to engage in farming and other business activities like mining and lumbering.

Mr. Boateng condemned the abuse of drugs because “drugs stimulate and depress the body and later give health problems causing the body to lose strength.”

He said tramadol could not be taken out of the system as a solution to prevent its abuse by the youth because “it is one of the cheapest prescribed medications for reduction and suppression of pain.”

Mr. Boateng, therefore, appealed to ‘over-the-counter medicine sellers’ (non-pharmaceutical retail shops) in the region to sell tramadol only to those with prescriptions duly endorsed by qualified health officials.

As a controlling measure, NaCoC had been engaging the ‘over-the-counter medicine sellers’ in the region to sensitise them about the abuse of tramadol use among the youth, he indicated.