July 10, 2022 General News Comments Off on Commander calls for relocation of Sege Fire Service to a demarcated security zone 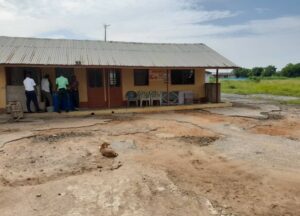 Mr Binney Boama, the District Commander, Ghana National Fire Service (GHFS), Sege Command, has called for the immediate relocation of the service from the civilian zone to a demarcated security zone in the district.

“We are a security regiment, located on the same compound within a civilian-controlled environment at the District Assembly with cars coming in and out anyhow, which poses a threat to the movement of fire tenders in case of emergencies. It’s not the best,” he said.

Mr Boama, in an interview with the Ghana News Agency in Sege, called on the Government to help provide the district with a standard fire station to aid their operations.

He said the station has been assigned to the District Assembly to use its facility for temporal purposes to attend to emergencies in the district, especially accidents but they were not able to move the station after years of operation.

He stated that the station must meet its standard to be able to operate professionally and added that it was long overdue to relocate the GNFS Sege District Command to its security regiment.

The Sege GNFS District Command was commissioned on June 27th, 2018, in a wooden structure as a temporary place for personnel.

The office for Senior Staff has been turned into a storeroom where tools, equipment, and belongings are kept due to the bad state of the wooden structure.