An Accra Circuit Court has remanded a sales manager into Police custody, pending sentencing for dishonestly appropriating GH¢8,000.00 belonging to his employer.

Collins Mensah admitted to fraudulent breach of trust but sentence was deferred to enable him to “settle himself with the complainant.”

The Court presided over by Mr Samuel B. Acquah asked him to come back to court for his sentence on July 21, 2022.

Police Inspector Daniel Danku told the Court that Thomas Dasitey, the account clerk of the (Okoampah Ernest Asare Company Limited), which deals in Ashfoam and plastic products was the complainant.

He said the accused person was the sales manager of the Teshie Tsuibleoo branch of the company.

On June 26, 2022, Dasitey, the account clerk, on his routine duty of stock-taking, discovered that there were inconsistencies in the records of sales.

The Prosecution said Dasitey then questioned the accused on the findings but did not receive any reasonable response.

Inspector Danku said the account clerk further established after a preliminary observation that about GH¢28,000 could not be accounted for in goods and cash.

He said with the consent of the CEO of the Company, Dasitey reported the matter to the Police which led to the arrest of the accused. During interrogation, the accused admitted that he took money out of sales amounting to GH¢28,000.00 but could not tell what he used it for.

Facebook Twitter WhatsApp LinkedIn
2022-07-07
emmakd
Previous Government is committed to strengthening identity management eco-system – Dan Botwe
Next RTI law is not a media law, it is for all – RTI Commission 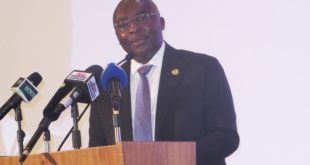 Two in court for allegedly swindling businessman of $85,000