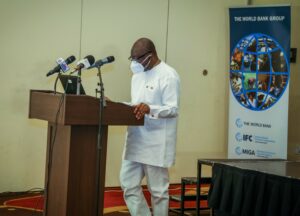 Last week as Ghana was announcing its intention to seek help from the International Monetary Fund (IMF) to resuscitate its ailing economy brought down to its knees by mismanagement, bad governance, wastage and corruption, the company connected to the Minister of Finance and Economic Planning, Ken Ofori-Atta, Enterprise Group, was declaring increased earnings.

Even though Ofori-Atta stepped down from being a director of the company following his appointment as Minister in 2017, he still has strong links to the company as his co-founder at DataBank, Keli Gadzepko is the Group CEO and his wife, Dr Angela Ofori-Atta, a psychologist, holds a directorship at the company, the company’s website shows.

Last week Thursday at its 12th Annual General Meeting, Enterprise Group announced that its earnings rose from GH¢847.7 million in 2020 to GH¢1.16 billion in 2021.

“However, our underlying Net Profit after Tax was GH¢122.85 million, a decrease of 16 per cent on the previous year’s. This was because of the increase in benefits and claims payments and reserving provisions made during the year,” Gadzekpo told the meeting.

Meanwhile, the country’s public debt has been rising beyond sustainable levels. The debt as at March 2022, has exceeded 80 per cent, according to the Bank of Ghana. The public debt has increased to 80.1 per cent of GDP.

The Bank of Ghana says provisional data on budget execution for 2021 indicated an overall broad fiscal deficit (cash, excluding financial sector clean-up costs) of 9.7 per cent of GDP, against the programmed target of 9.4 per cent of GDP.

While the country’s economy as the figures show is dipping, the company’s finances are doing well.

Inflation has been galloping, almost at 28 per cent, driven by the prices of housing, food and transport, which has exacerbated the cost of living and worsened it. The cedi has been performing badly against the US dollar. Then about a month ago the government introduced a punitive tax – the Electronic Transaction Levy (E-Levy) which it touted as the panacea out of the depressing economic crisis. A crisis it blamed on the COVID-19 pandemic and the Ukraine-Russia conflict, and not its own mismanagement, bad governance and profligacy.

What is the company the Minister is connected with getting right, that the country which economic system he is managing isn’t?