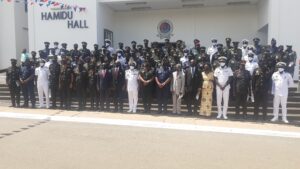 Brig Gen Sakyi admonished the officers to be astute, meticulous, steadfast and strive to uphold high ethical standards to protect their image and the Forces for national growth.

He said this in Accra at the graduation ceremony of the GAF Junior Staff Course 77 after five months’ training in communication skills, and other security training regimes.

He said the Course would broaden the professional knowledge of the officers on security issues to respond to emerging threats on the continent.

Brig Gen Sakyi charged the officers to apply the knowledge acquired in their respective countries to ensure peace and security, especially as the world was saddled with the threat of terrorism, religious disputes and environmental disasters.

He urged them to put their ears on the ground and be abreast of security issues and early warning signals to provide effective leadership to address any security threats.

Brig Gen Albert Kwadwo Dawohoso, the Assistant Commandant, GAF Junior Division, said the Course was to train them to perform staff functions by developing their leadership analytical and communication skills while providing the foundation for their career development.

He said as part of the experimental package for the Course, the officers undertook an environmental study tour to the Western North region to conduct research into some of the existing challenges to the development of the region.

“Examining the Impact of the Russian Invasion of Ukraine on the Security Situation in Europe,” “Curbing the Menace of Corruption to Promote Sustainable Development in Ghana,” and “Harnessing Local Economic Potentials to Address Overdependence on Foreign Aid in Ghana,” were some of the research topics.