Like clockwork, diarrhea among children spikes sharply during Cape Town’s long summer. The city tends to blame the heat and people’s poor hygiene practices, but its own sewage infrastructure may be the real culprit

CAPE TOWN — With her 18-month-old daughter suffering from acute diarrhea in mid-February, Novangele Nyikana left the one-room home she shares with her partner and  children, and sought help at the Khayelitsha hospital in Cape Town.

Nyikana’s daughter Thina was admitted and spent three weeks being treated for what is the second leading cause of death among young children globally. In Cape Town, 20 children have died due to diarrhea this summer thus far, according to city and provincial government spokespersons, Luthando Tyhalibongo and Mark van der Heever, respectively.

Khayelitsha hospital does not have beds for patient attendants to sleep on. Nyikana spent her nights trying to sleep in a chair and got a kidney infection after a week for which she was treated with intravenous antibiotics for seven days. After recovering, she spent another week on the hospital chairs.

Back home in the Taiwan informal settlement of the sprawling and densely populated Khayetlitsa township, her partner, Sicelo Kupe, cared for their three other children. This meant neither Kupe or Nyikana, who are both unemployed, could look for work opportunities to supplement the meager income they receive from two child support grants.

Less than a month after the youngest came out of hospital, Nyikana’s two-year-old got diarrhea too. Having lost her appetite, the limp toddler displayed none of the energy expected at that age when this reporter visited their home in early April.

There is no running water in their home but sewage runs along the streets. Water is collected from a communal standpipe about 30 meters away and the family has to use a communal toilet. There are five toilets for an estimated 100 families in their section of the settlement. But arguably the largest threat to the childrens’ health is the raw running sewage.

There is hardly a street in the area that does not have broken and overflowing sewer covers. Almost every journey – all taken on foot – involves stepping through or across puddles or potholes contaminated with sewage. This includes the walk Nyikana’s preschooler takes to kindergarten.  Living in the close confinement of one room, it is almost impossible to prevent this contamination being traipsed into the home. It is not surprising then, that Nyikana’s children are among the thousands treated for diarrhea in the past six months.

According to Patricia van der Ross, a member of the city’s mayoral committee for health, day clinics run by Cape Town city authorities  treated 4,533 infants for diarrhea during February, a 146% increase from February 2021.  Hospitals, such as the Khayelitsha Hospital where Nyikana’s 18-month-old child was treated, and which are managed

by the provincial government, treated an additional 4,024 cases between November and the end of April this year. This summer (November – April), a total number of 18,174 cases were reported across Cape Town.

Cape Town’s long summer is known as the “surge season”. Every year, diarrhea cases among children rise dramatically from single digits in October, to about 2,000 in November, dropping off equally dramatically in June.

With still a month to go in the current surge season, city health clinics have reported 14 child deaths due to diarrhea, while six children have died from the same cause at provincial hospitals within the city.

This season’s 146% year on year increase of child diarrhea cases is a five-year record but the  Covid-19 lockdowns may have fuzzied the picture of the immediate past two years. Instituted at the end of March 2020, the lockdowns which restricted people’s movement to varying degrees ended on 4 April 2022. Compared to the last pre-covid month, February 2020, the increase is 80%.

This season has however been the least fatal, data provided by the city health department indicates.  In the summer of 2017/18, 50 children died compared to this season’s 20. 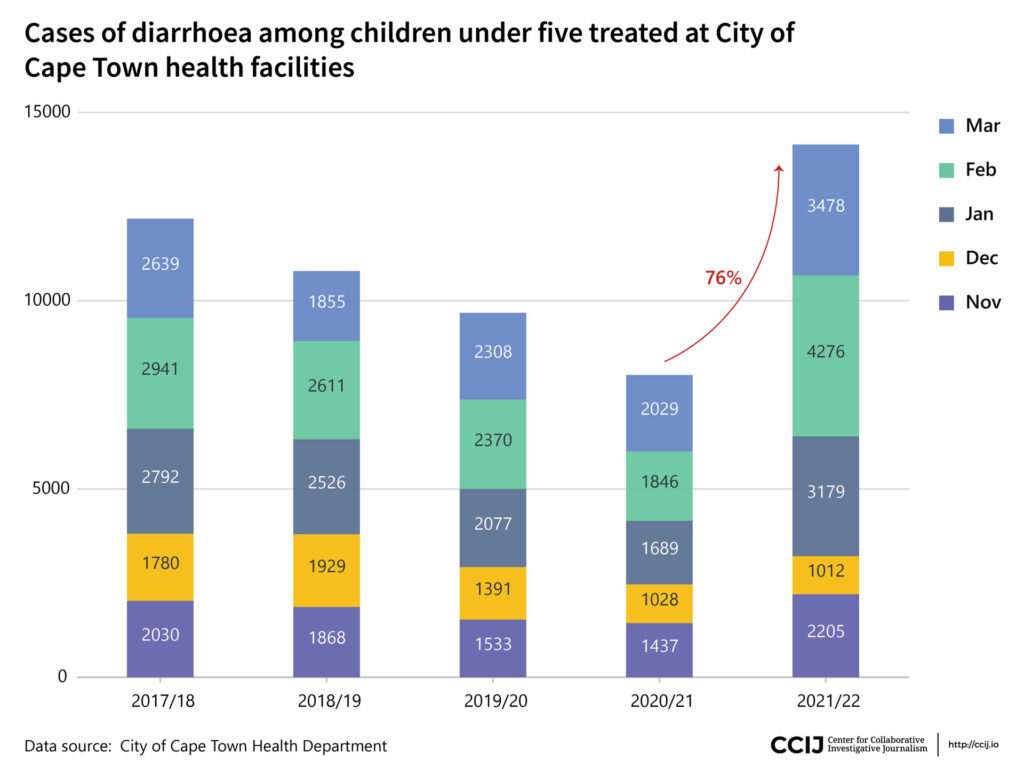 No investigation into sewage link

Diarrhea most commonly spreads “through contaminated food or drinking-water, or from person-to-person as a result of poor hygiene,” as a WHO fact sheet states. City authorities claim municipal drinking water, such as provided to Nyikana and her family via a standpipes within the informal settlement, are of the highest quality. This is backed up by information on the data portal of the national Department of Water and Sanitation, which indicates that Cape Town’s drinking water meets quality guidelines.

However, other research such as conducted by the Inter-American Development Bank in Bolivia, reveals that exposure to “fecal contamination is a leading cause of childhood infectious disease in low and middle-income countries”. In Khayelitsha, Dunoon, Philippi, Langa, and other poor areas in Cape Town where raw sewage spills onto streets and communal toilets are often shared by as many as 25 families, it’s not hard to see exposure to fecal contamination. Yet, the city’s health department is not investigating any links between sewage spills and cases of child diarrhea.

Dr Jo Barnes at Stellenbosch University’s Department of Global Health,  believes  it has little to do with summer heat, pointing out that the largest number of cases are reported in late summer and early autumn months, which are cooler. Barnes sees a direct link between these cases and sewage in the environment.

She says that years of research and consultation with pediatric specialists leads her to believe it is the first rain showers of late summer and early autumn (February and March), the harbingers of the wet winter season, which are the main drivers of diarrhea outbreaks. Nyakina’s baby was admitted to hospital two weeks after the first late summer shower on 3 February.

Barnes’ theory is that during the dry summer(November to March), fecal pollution from sewage overflows and open defecation where sanitation services are inadequate, “piles up in the environment”, but remains static as it dries from the heat. It is then mobilized to flow along streets and streams when the autumn showers arrive. Compromised sewerage infrastructure which may have avoided overflows due to lack of storm water ingress, also starts overflowing.

“It’s as regular as clockwork,” she said. “Within a week or two, the number of diarrhea cases pick up significantly. It only takes a few millimeters of rain to carry this mess back into circulation.”

It is children from poor families who are affected most as their restricted diet means their immune systems are not very strong, says Barnes.

Later, as the heavier winter rains set in, the pollution is flushed from the streets and fields into the rivers and ocean, coinciding with a drop in reported diarrhea cases.

There were an average of 323 reported sewage spills across the city in January, according to figures provided by Cape Town mayoral committee member for water and sanitation, Zahid Badroodien. However, this may not include chronic sewage spills in areas such as Khayelitsha Site C, where reporting by residents has become redundant. 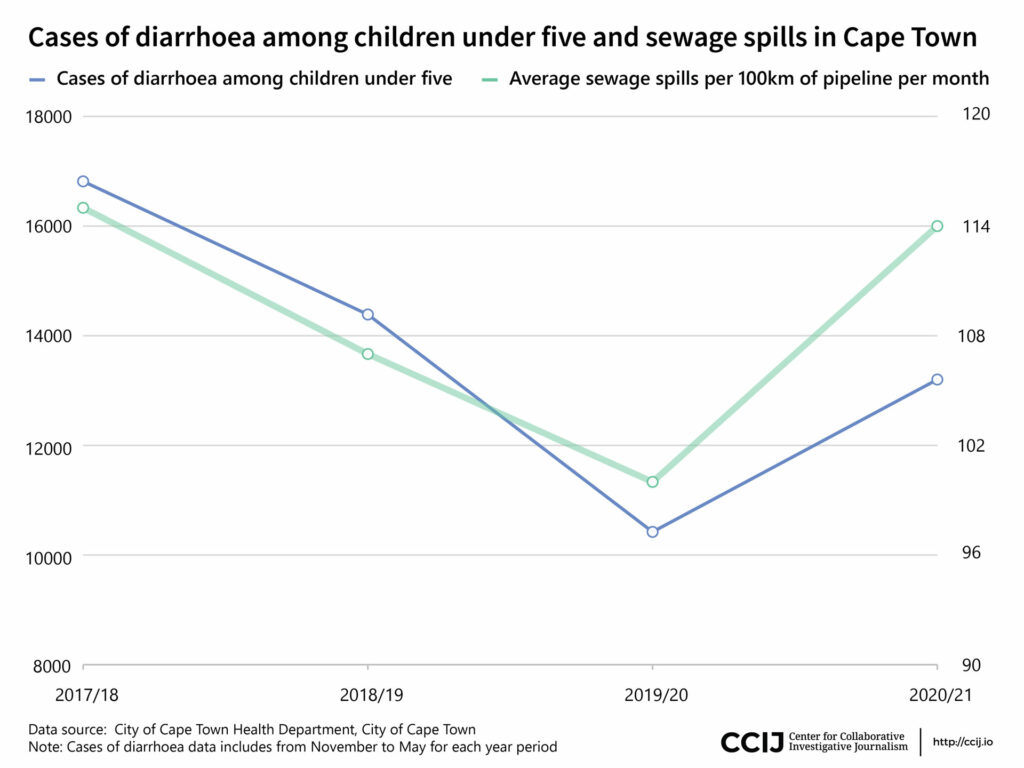 In response to questions on the situation in Site C specifically, Badroodien said there are contractors on site but were awaiting the relocation of structures before repairs to sewer infrastructure could proceed. However, a time period for completion of repairs could not be provided. 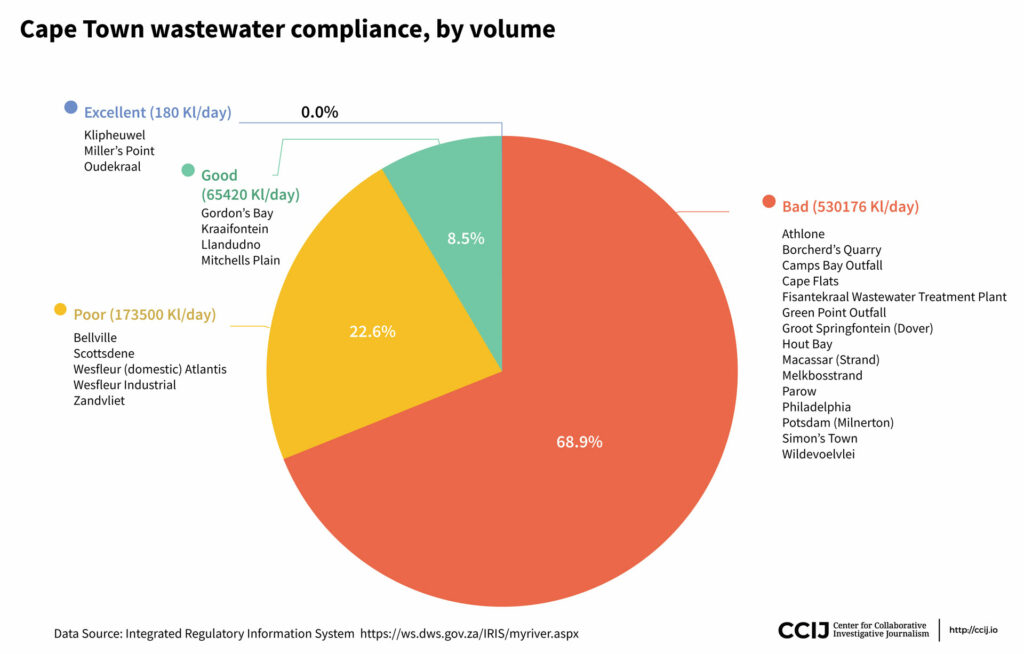 Partnering with communities and responding to sewage spills was also “high on the agenda”.

The big ticket items in the budget up to 2025 include R755m to increase sewer pipe replacement from 25km to 100km of piping per year, R529m to upgrade and repair sewer pump stations, and R3,3bn on upgrades to wastewater treatment works. A further R860m is to be spent on major sewer upgrades in certain parts of the city.

He said the city currently provides 57,000 toilets of various types, along with cleaning services, and 7,640 taps to 257,000 households in informal settlements such as Taiwan. Over the next three years, R2,38bn will be spent on water and sanitation services to informal settlements.

He said the goal was to halve the number of sewage spills by 2030. Meanwhile, the annual child diarrhea continues to put the lives of Cape Town’s poorest children at risk.

This investigation was produced in collaboration with the Center for Collaborative Investigative Journalism and OpenUp, with the support of the Open Society Foundation.