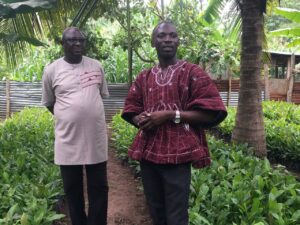 The Techiman South Municipal Assembly has distributed 111,190 cashew seedlings to cashew farmers within three years under the government’s Planting for Export and Rural Development (PERD) programme, to boost cashew farming.

Mr Benjamin Yaw Gyarko, the Municipal Chief Executive (MCE), at a ceremony in Techiman in the Bono East Region, to present to seedlings to this year’s beneficiary cashew farmers said it was initiated to improve the socio-economic status of the farmers and their families.

Moreover, it is aimed at increasing the production capacity of the crop to increase its export and more benefit in the cashew industry’s value chain.

He assured farmers of ready market for their produce as efforts were being made by stakeholders such as the Regional Coordinating Council (RCC) to fast implement the region’s agro-industrialization drive to attract more investors.

Mr. Gyarko announced that the Municipality had taken delivery of 22,500 bags of fertilizer for distribution to farmers under subsidized price.

Mr James Adu, the Techiman Municipal Director of Agriculture said the cashew seedlings were the polyclonal type that could mature within three years duration and could produce for 35 or more years.

He, however, said the farmers must endeavour to give the seedlings the necessary care to grow well and mature on time.

Mr Adu said though some of the youths were engaged in cashew farming, this was time for those unemployed to seize the opportunity to join the cashew farming business because the seedlings were being distributed free with fertilizer at subsidized price from government.

“It is an avenue to make economic gains for a better living condition,” he added.

Later in an interview with some of the beneficiary farmers, Madam Hannah Boakyewaa, a 35-year-old cashew farmer at Tanoso near Techiman described the initiative as “a golden opportunity” offered to them by the government, saying, “now I have the hope of providing quality livelihood for my family.”

Mr Kwadwo Kyeremeh, aged 54 and Mr Anthony Anokye, 60 years commended government “for putting money in our pockets” through the implementation of the cashew model under PERD, indicating that it was in the right direction to strengthen them economically.