June 25, 2022 Insurance Comments Off on Ghana government and banks called upon to provide crop insurance for farmers 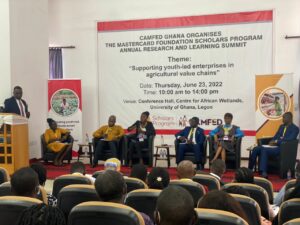 Professor John Asafu-Adjaye, a Senior Fellow, African Centre for Economic Transformation, has appealed to government to consider introducing policies that would enable farmers to get insurance for their crops.

The Insurance will protect against either the loss of farmers’ crops to natural disasters, such as hail, drought, and floods, or the loss of revenue to declines in the prices of agricultural commodities.

He made the call when young farmers, especially females lamented over the challenges they faced in the value-chain with accessing credits, markets and lands at the “Mastercard Foundation Scholars Programme Annual Research and Learning Summit” organised by Camfed Ghana.

The Summit, in Accra, was on the theme: “Supporting Youth-led Enterprises in Agricultural Value Chains”.

Prof Asafu-Adjaye said many financial institutions were hesitant to insure crops due to some risks that might be attached to it.

He said it was, however, crucial that government played a pivotal role in making it possible especially to achieve the Paris Agreement and fight climate change.

Mr Rexford Akrong, a PhD Candidate, University of Cape Coast, presenting a study he conducted on: “Youth Agriprenuership in the horticulture value chain: the case of small scale mango farmers in southern Ghana,” said in Shai Osudoku, Yilo Krobo and Manya Krobo, mango production was male dominated and the situation was same nationwide.

He said whereas nearly all food crops produced in the country ended up in domestic low value markets, a significant proportion of cash crops such as mango produced were sold in both domestic and international high value markets.

Mr Akrong said the study also showed that young people could spiral growth in the sector as they were more educated, flexible and dynamic in their physical and mental primes.

Their participation was, however, minimal despite the opportunities it presented, thereby reaping them of benefits accrued to participate in remunerative markets.

Speaking on gender dimensions in the mango production space, the PhD Candidate said women’s involvement in production was minimal, and they provided farm labour which was largely unpaid.

They were predominantly mango traders and participated in domestic low-value markets.

The study also proved that old farmers had a competitive edge over young people in terms of labour with large family sizes, income, and experience, access to extension, collective action, economic upgrading and motorized transport.

Mr Akrong recommended that policy makers organised capacity development programmes for the youth and intensified their access to both government and private extension services.

He also urged them to create opportunities for access to both input and financial credit among the youth, capacitate their access to hired labour and promote their infrastructural development in rural areas.

He also called on the government and stakeholders within the agricultural value-chain to increase youth’s access to mentorship, money and markets to be able to promote entrepreneurship.

“Because what is the point of getting mentorship and money to produce, when you are not getting markets to sell them or anyone to buy them,” he added.