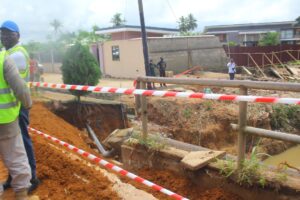 The Government through the Ministry of Roads and Highways had put together a special response team and a programme to quickly reconstruct all devastated roads and bridges.

Roads Sector Minister Kwasi Amoako-Attah gave the hint when he inspected the reconstructed Jukwa portion of the Cape Coast-Twifo-Praso main road, part of which was washed away by floods and rendered inaccessible after last Saturday’s floods.

Many roads and bridges were also rendered inaccessible due to the impact of the floods.

The Minister predicted more washouts of roads in the wake of the recent torrential rainfalls.

“People of this country should be rest assured that we have a well laid-out programme to deal with such matters wherever they occur throughout the country in all they 16 regions even though it is our prayer that we don’t continue to experience them because it involves huge costs.

“Under the government of President Akufo-Addo, no area will be allowed to be inaccessible and cut off for more than 24 hours,” he stated.

The Minister was accompanied by Mrs Marigold Assan, the Central Regional Minister and officials from the Ghana Highways Authority, Feeder and Urban Roads also inspected a collapsed bridge at Berase and another at the verge of collapse at Ankaful.

Addressing the media later, Mr Amoako-Attah said the Government is committed to ensuring that no road was inaccessible for prolonged periods to inconvenience residents and travellers.

He added that instead of criticising the government blindly, citizens should rather lend their support to solve the problems.

For her part, Mrs Assan said the havoc caused by the floods was not only a probe of encroachment of waterways but also due to the usually high volumes of water.

She cautioned people leaving in Flood-prone areas to relocate until the rainy season was over.

The Regional Minister further reiterated the President’s commitment to pull down all structures in waterways to limit the impact of floods on the country.