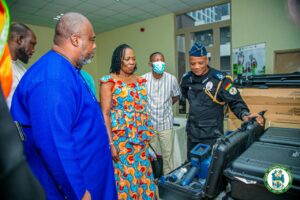 The Accra Central Motor Traffic and Transport Department (MTTD) of the Ghana Police Service has been presented with six new TruCAM II speed detection devices to enforce law on the speed limit in Accra.

The devices would also help identify other traffic violations such as aggressive driving, misuse of designated lanes, distracted driving, obstructing traffic, and seatbelt violations, among others.

The items were made possible through the initiative of the Accra Metropolitan Assembly (AMA) with support from the Bloomberg Initiative for Global Road Safety (BIGRS).

Mrs Elizabeth Kwatsoe Tawiah Sackey, the Accra Metropolitan Chief Executive, who presented the devices to the Police, expressed the hope that the donation would go a long way to ensure the enforcement of the speed rules to prevent road crashes in the metropolis.

“Today, AMA together with its international partners, BIGRS is here to demonstrate our resolve to help curb this needless loss of lives on our roads. In this season when road crashes abound, it is paramount to assist the police MTTD with devices so that they can properly and professionally enforce speed in Accra,” she stated.

Mrs Sackey said findings from the AMA Road Safety Report indicated that reported road traffic deaths increased from 103 in 2019 to 136 in 2020, recording a 32 per cent increase hence the need to vigorously enforce the rules on speeding.

“Road crash and injury statistics tell an upsetting story about the state of road crashes in the city of Accra. This lends credence to the global prediction of an increase in road traffic crashes and deaths over the next 10 years if governments do not put in place urgent concerted action to stop the carnage,” she noted.

The Mayor called on the police to enforce the road traffic regulations without any fear or favour.

She called on the Driver and Vehicle Licensing Authority (DVLA) not to issue roadworthy certificates to vehicles that were not roadworthy to safeguard the safety of drivers, passengers, and other road users.

Mrs Sackey expressed gratitude to stakeholders who have contributed to the education and enforcement of road safety laws to save lives.

The Director-General of the MTTD of the Ghana Police Service, Deputy Commissioner of Police (DCOP) Mr Ofosu Agyemang, who received the devices on behalf of the Inspector General of Police (IGP), Dr George Akuffo Dampare, thanked the AMA and the BIGRS and other partners for their efforts in ensuring safety on the roads.

He said the collaborative efforts of the partners and the MTTD had helped to lessen road fatalities in the city of Accra.

Facebook Twitter WhatsApp LinkedIn
2022-06-21
emmakd
Previous I was told I wouldn’t succeed because I looked like a gospel musician – MzVee
Next GOIL devotes GH¢14.5m to corporate social responsibility projects