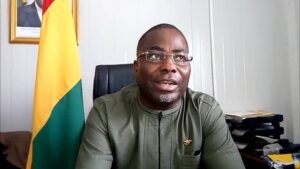 Mr Charles Onuawonto Bissue, has filed his nomination to contest for the General Secretary position in the upcoming elections of the New Patriotic Party (NPP).

Mr Bissue served as the immediate past Western Regional Secretary of the party and was a member of the National Council for two terms.

Addressing the media after submission, the aspirant said the party was at a critical stage of making a history in the electoral processes in Ghana particularly ruling beyond the eight-year term “and, thus, required fresh, tact and innovative leaders to retain and sustain political power.”

He indicated that the NPP was credible and efficient but had not been managed effectively to inspire members and the Ghanaian electorates, adding that, 2024 was entirely new season to break existing political record.

The aspirant said he intended to engage delegates across the country to sell his vision to them for their buy-in and vote for him before the July 14 National Delegates Conference and the subsequent elections to elect executives to steer the affairs of the party for the next four years.