3 weeks ago General News Comments Off on Dr K.K. Sarpong sworn in as UPSA Chancellor 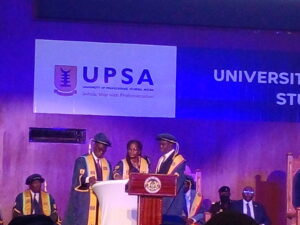 Dr Kofi Koduah Sarpong, a Chartered Accountant and former Managing Director of Tema Oil Refinery, was on Thursday sworn in as the Chancellor of the University of Professional Studies, Accra (UPSA) for a five-year tenure.

He is the second Chancellor of the UPSA after the tenure of His Royal Majesty, Drolor Bosso Adamtey I, known in private life as Dr Kingsley A. Fletcher, the Suapolor of SE (Shai) Kingdom.

Dr Sarpong has now become the non-residential ceremonial head of the University, who will preside over very important ceremonies and leverage on his network and influence to steer the UPSA towards its strategic goals.

His appointment follows the unanimous recommendation and approval by a search committee, the Executive Committee and the Academic Board of the University.

Vice President Mahamudu Bawumia administered the Oaths of Office and Secrecy during the swearing-in and investiture of the new Chancellor in Accra.

It was attended by members of the Governing Board, Management, staff and students of the University, as well as some traditional rulers, family members and loved ones.

In his inaugural address, Dr Sarpong pledged to work collaboratively with the Academic Board of the University to establish a Chancellor’s Endowment Fund for research.

He said he intended to raise GH¢20 million for the Fund so that the University could have a stable income for research purposes.

Dr Sarpong commended the Governing Board, Management, staff and students of the University for the honour done him and promised to work tirelessly towards the school’s development.

Vice President Bawumia, in an address, lauded the new Chancellor for distinguishing himself as a public servant and believed that he would leverage on his wide network and influence to steer the University to a new level.

He commended the Board and Management of the UPSA for prudently using its internally-generated funds to construct a 1,600 hostel facility to accommodate students.

He entreated all universities in the country to equip themselves and expand their infrastructural base to absorb the large number of senior high school (SHS) graduates benefitting from the Free SHS Policy.

The Vice President also urged the universities to embrace technology to provide quality teaching and learning, noting that the world was undergoing transformation, therefore, it was imperative to adapt to the changes in the global ecosystem.

“For you to remain relevant in the global ecosystem, universities in Ghana should be dynamic, innovative and flexible and provide contextual module of education to solve societal problems,” he said.

The Free SHS Policy introduced by the Government had increased secondary school enrolment from 881,000 students in 2016 to 1.2 million over the last five years, Vice President Bawumia noted.

He gave the assurance that the Free SHS would remain a core policy of government to improve access to secondary education for all Ghanaian children of school-going age.