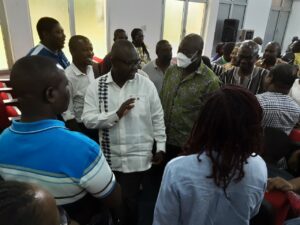 Preparatory works are ongoing on the 403 acres of land secured at Pokuase/Amasaman in the Greater Accra Region and Dedesua in the Ashanti Region for the implementation of two affordable housing pilot schemes.

Mr Francis Asenso-Boakye, the Minister of Works and Housing, who said this at a media briefing in Accra, said the Ministry had commenced active engagements with the Finance Ministry and the Lands Commission towards securing government acquired lands for the National Affordable Housing programme.

The projects, part of the district housing programme, the Minister said, was to increase access to rental housing for public sector workers at the Metropolitan, Municipal and District level, create jobs and improve living conditions.

He said the pilot phase would be implemented in 16 districts across the 16 regions of the country.

Although the housing deficit in the country had reduced from two million to 1.8 million housing units, he said the housing delivery system had failed to meet the needs of the low-to-middle income group.

Approximately, 12.7 per cent of the total structures counted in the 2021 National Housing and Population census, were vacant housing units, giving a clear indication that Ghana’s housing supply had “outpriced” the average person in Ghana, he noted.

The review would among other things, remove inherent constraints, stimulate private sector investment and offer protection to low-income and vulnerable tenants from abuse and arbitrary actions.

To that effect, he said a Draft Rent Bill had been prepared and active stakeholder engagements had commenced.

On the Saglemi Affordable Housing project, the Minister said government was committed to completing it and that Cabinet was currently reviewing various options towards the completion of the project.

“This government will not renege on its duty to ensure that, Ghanaians obtain value for money in the application of the taxpayers money,” he added.