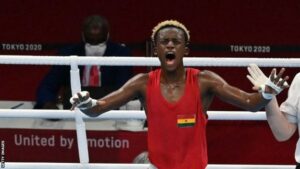 The Olympic-bronze medallist showed class to hand his opponent a second-round technical knockout with a flurry of hooks and uppercuts to down the South African.

With the legendary Ike “Bazooka” Quartey in his corner, the young boxer didn’t show any nerves right from the start of the bout as he outboxed his opponent to continue his unbeaten streak.

After his victory, Takyi dedicated his victory to his fans back home in Ghana as he pushes for greater exploits in the near future.

In his first bout back in April, the 20-year-old boxer recorded a second-round technical knockout against Kamarudeen Boyefio.