3 weeks ago Africa/International Comments Off on PPP, game changer for cross-border infrastructure development for AfCFTA 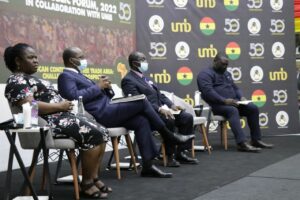 Professor Festus Ebo Turkson, a Development Economist, says, Africa has the potential to build a strong infrastructure base through Public Private Partnerships (PPPs) to enhance cross-border trade on the Continent.

Prof Turkson pointed out that there were deficits in both soft and hard infrastructure on the continent, a major bottleneck to the implementation of the AfCFTA.

However, these challenges could be addressed by harnessing opportunities PPPs offered to the continent to facilitate cross-border trade, thereby, encouraging investments to increase economic integration and cooperation among Africans,he said.

He spoke at the just ended Ghana Academy of Arts and Sciences (GAAS) and Universal Merchant Bank (UMB) public lecture in Accra, noting that the reliance on PPPs was a viable way for Africa to support large infrastructure investments and development.

Prof Turkson, who is the Coordinator, Economic Policy Management Programme, University of Ghana, said: “There are opportunities that the continent can leverage to increase intra-African trade, and this include PPPs.”

“PPPs distribute resources, risks, responsibilities and rewards between the public and private sectors, allowing Governments to overcome fiscal constraints and filling the gap in modern infrastructure,” he stated.

He added that PPPs also encouraged the use of advanced technology and increase efficiency in project delivery, operations, and management.

As such, PPPs, together with improvement in regulatory regimes mostly at ports and maritime transport sector, technological change and increasing bargaining power in international trade relations would be a ‘game changer’ for AfCFTA.

Prof Turkson, therefore, asked African leaders: “Not to only pay lip service to the successful establishment of the AfCFTA but should support the building of trade infrastructure to enhance intra-Africa trade.”

“It is only when Africa’s trade infrastructure improves to the level of global standards, that the enormous benefits of the AfCFTA will be realised,” the Development Economist emphasised.

Africa’s land mass is huge enough to cover China, India, United States, and most parts of Europe yet intra-regional trade on the continent stood at 16.6 per cent in 2020, making it one of the lowest when compared to intra-regional exports in Europe (68 per cent), Asia (58 per cent), and North America (30 per cent), and has the least infrastructure base.

The World Bank for example ranked Sub-Saharan Africa at the bottom of all developing regions in terms of infrastructure performance, with its road density declining over the past two decades, accounting for the low intra-regional trade.

All these challenges, Prof Turkson said, could be addressed through effective partnership between the public and private sector.

Dr Ernest Addison, Governor of the Bank of Ghana (BoG), who spoke on: “Boosting the AfCFTA: The role of payment and settlement systems,” said a robust payment infrastructure was critical to ensure the advancement of intra trade on the continent.

He stated that together with digitalisation, an integrated payment system would help Africa foster convergence of institutional framework and create a more regional financing ecosystem.

“Collectively, we are working to deliver an integrated and interoperable continental payment system by linking all the regional payments leveraging the PAPSS connectivity to enhance the power of digital payment for value creation,” he added.

It was for this reason that the Bank of Ghana has been working with central banks in Africa on the Pan African Payment and Settlement System (PAPSS) to facilitate the smooth flow of payments, he said.

Similar engagement to enhance regional trade was being done with the SADC-RTGS, a payment system for countries in the Southern African Development Community (SADC).