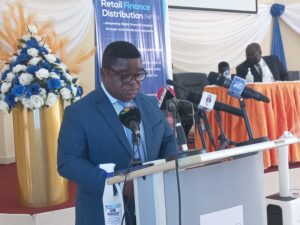 The Institute of Statistical, Social and Economic Research (ISSER), University of Ghana has launched the Retail Finance Distribution (ReFinD) Research Initiative on deepening digital financial inclusion among the vulnerable.

Funded by the Bill and Melinda Gates Foundation, the five-year project which started in November 2021, will also focus on women’s access to financial services in Low- and Middle-Income Countries (LMICs), poor households, Small and Medium Enterprises and other retail businesses.

The initiative, which cost about $5 million, will engage researchers from the Global North and the Global South and seek to foster future partnerships and capacity building through funded research.

ISSER will coordinate the project, including recruiting, managing staff, and providing project leadership.

The initiative aims to demonstrate both how to effectively expand the reach of agent networks through public policy and commercial solutions that can plausibly be scaled up, and to advance public knowledge about the structural constraints limiting agent networks globally.

Professor Peter Quartey, Director, ISSER, said the project was a platform for sharing research findings, news and information, as well as resources for researchers, industry players, policymakers, and civil society organizations interested in collaborating on the initiative.

He said the ReFinD research initiative would see qualified research teams, including researchers based at ISSER and those in other locations in Ghana and across the globe, implement competitively selected projects on how to expand digital finance, especially retail distribution networks.

Recommendations and associated outputs, the ISSER Director further stated, would be aimed at promoting access to finance among marginalized groups like women and people experiencing poverty with focus on the research initiative, along with its potential to advance the knowledge and skills of researchers, compelling elements that strongly supported ISSER’s vision.

However, he said, it turned out that retail agent networks were necessary building blocks to a robust digital financial ecosystem due to their ability to convert money between physical cash and digital currency and serve as onboarding channels for a broader set of digital financial tools and services.

He said the ReFinD project, as part of public and commercial solutions, would work to expand the digital finance retail agent network especially in rural areas by relaxing registration requirements for agents and creating a tiered agent registration system.

Prof. Annan expressed optimism that the research would advance research and provide rigorous evidence that would inform policy and practice about digital financing retailing in LMICs.

Those, he explained, called for rigorous experimental variation in the market to generate actionable evidence and to justify commercial interventions, policies, and regulations.

“But pursuing these require meaningful partnerships between academic researchers and various actors in the DF marketplace service providers, businesses, lenders, regulators, and practitioners,” he said.

Prof. Ernest Aryeetey, former Vice Chancellor, University of Ghana, and a member of Policy Committee of the Project, told the Ghana News Agency the project had been designed to ostensibly deepen digital financial inclusion among the vulnerable and allow for Ghanaian researchers to work with the world best researchers to enhance their competitiveness.

He expressed optimism that policy makers would be in readiness for the outcomes to shape policy, reap the dividends therein and promote the development of the country.

Mr Seth Garz, Senior Programmes Office, Bill and Melinda Gates Foundation, said as part of efforts to enhance inclusive digital financing, his outfit was undertaking programmes to play a catalytic role in broadening the reach of digital payment systems, particularly in poor and rural areas, and expanding the range of services available on those systems.