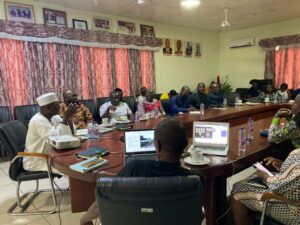 He said fatigue driving had been identified as one of the major causes of road traffic crashes and a threat to anyone behind the wheel or on the highway.

The Ag. Director-General made the observation during a roundtable discussion held by NRSA with various stakeholders on the need for the provision of rest stops on major highways in the country.

Present at the meeting were representatives from Ghana Roads and Highways, Ghana Shippers Authority (GSA), Motto Traffic and Transport Department of the Ghana Police, Ministry of Roads and Highways, Urban Roads, J.K Horgle Transport Limited, Bono East Regional Coordinating Council and Traditional leaders from the Kwahu traditional area, among others.

“Since there are no rest stops, most of these drivers drive without resting. This emerging problem needs to be addressed. It is, therefore, important for us to be gathered here today to deliberate, find the causes, share ideas, and provide solutions for the problem.”

“We all come from institutions where we play some role in ensuring safety on our roads. Therefore, let us all treat this as a national call to help minimise road traffic crashes,” he said.

He commended the GSA for the provision of a rest stop at Elubo to support efforts by the Authority to improve road safety in Ghana.

The Ag. Director-General said commercial vehicle drivers and shift workers were among the job categories identified as most vulnerable to fatigue and sleepiness.

He added that the Authority had over the years recorded crashes as a result drivers parking at unauthorised places on the highway stretch, which posed danger to other drivers and road users.

“There are some other drivers who also stop or park at places, which are not approved. These also causes road traffic crashes, especially at night. The National Road Safety Authority has recorded crashes because of such incidents,” he noted.

In a presentation by Mr Daniel Wuaku, Ag. Director for Planning and Programmes at the NRSA, he mentioned that there had been a reduction in crashes, injuries and deaths by 5.61 per cent, 5.23 per cent and 8.80 per cent respectively from January to April 2022.

He added that, preliminary investigation conducted by the Authority revealed that, 50 per cent of fatal crashes occurred due to fatigue driving as well as indiscriminate parking of heavy and long goods vehicles.

Most of the participants expressed concern about the safety situation on major highways and pledged to do their best at their various institutions to help address the problem.