Ghana and Mozambique agree to cooperate 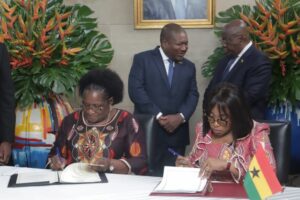 Ghana and Mozambique on Monday signed a joint permanent cooperation agreement to boost cooperation between the two countries.

They also signed a visa waiver agreement for diplomatic and service passport holders.

The agreements, initialed for Ghana by Madam Shirley Ayorkor Botchway, Foreign Minister, and on behalf of Mozambique by Madam Vereonica Macamo Dlhovo, Minister of Foreign Affairs and Cooperation.

President Nana Addo Dankwa Akufo-Addo and his Mozambican counterpart, President Felipe Jacinto Nyusi, who is on four-day state visit to Ghana, witnessed the signing of the agreement at the Jubilee House, Accra.

The two countries are looking to collaborate in the areas of agriculture, tourism, oil and gas, energy, education, trade and industry, environment, science and technology.

At a press briefing jointly addressed by President Akufo-Addo and President Nyusi, both leaders affirmed their resolve to elevate relations between the two countries.

They agreed to work towards strengthening mutually beneficial economic and social partnerships.

President Akufo-Addo recalled the ties between Ghana and South African nation, which dated back to the struggle for self-determination and independence from Portuguese colonial rule, when the nationalist movement, Frelimo, was out doored in Ghana in 1962.

He was hopeful that President Nyusi’s visit would renew those bonds established by with Mozambique during the era of Kwame Nkrumah, Ghana’s first President.

“We have now decided to elevate our relationship to a strategic partnership between two countries by convening a joint permanent joint commission for cooperation to govern the relations between us” he said,

President Akufo-Addo emphasized that the COVID-19 pandemic and the on-going Russian war in Ukraine had established the fact that African countries should collaborate, share ideas and trade more among themselves to withstand the shocks of such occurrences in future.

“This visit of his excellency is taking place at a time when the world is dealing with the ravages of COVID-19 and the effects of rising tensions across the globe as seen in the Russia invasion of Ukraine as well as confronting the threats posed by terrorism and violent extremism.

“Every country on this earth including our own, is bearing the brunt of these developments.

“We are learning of valuable lessons from them and that is to develop the necessary infrastructure and resilient systems to mitigate any such devastating impacts in future and that no country can go it alone” President Akufo-Addo said.

On his part, President Nyusi thanked his host for extending the invitation to him, insisting that it was in the mutual interest of Ghana and Mozambique to firm up ties of friendship and economic cooperation.

He also relived the relations between the two nations and the support Ghana lent to his country during the period of independence and reiterated the commitment to strengthen ties and enhance strategic partnership for mutual benefit.

As part of his visit, President Nyusi visited the Kwame Nkrumah Mausoleum where he laid a wreath in honour of the late Ghanaian leader, and called at the headquarters of the Africa Continental Free Trade Area (AfCFTA) in Accra.

He is to be hosted to a State banquet at the Jubilee House on Monday evening and is billed to address the Parliament of Ghana on Wednesday, May 25, 2022.

Whilst in Ghana, Mr Nyusi will also attend the African Development Bank Groups’ (AfDB), annual general meetings scheduled to take place in Accra from May 23 to May 27, 2022.