May 20, 2022 General News Comments Off on Ghana participates in fifth Global Conference on Elimination of Child Labour 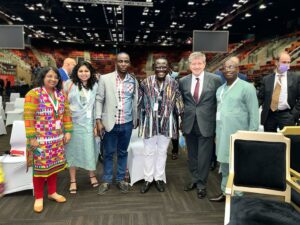 Ghana is participating in the ongoing fifth African Global Conference on the Elimination of Child Labour on the theme, “We Can # End Child Labour”, which is underway in Durban, South Africa.

A statement issued by Madam Charlotte Hanson, the Head of Public Affairs Unit of the Ministry of Employment and Labour Relations, copied to the Ghana News Agency said the purpose of the conference was provide an opportunity for the partners around the globe sharing the latest approaches to eliminate child labour such as inclusive education, social protection and labour inspection.

It would also identify the emerging innovations that respond to the dynamics nature of the challenges, highlights the central role of social partners and strengthen the commitment of the private sector.

It noted that the First Global conference was held in Norway in 1997, second in the Netherland in 2010, the third and fourth were held in Brazil in 2013 and Argentina in 2017 respectively.

It said the fifth Global Conference was being convene at a time when the world was recovering and responding to the multiple effects of the COVID-19 pandemic, which had had devastating effect on health, economic progress, equality and social development.

It noted that the conference, therefore, present an opportunity to assess progress made towards achieving the goals of Target 8.7, discuss good practices implemented by different actors around the world and to identify the gabs identified as well as the urgent measures needed to be taken to accelerate the elimination of Child Labour and Forced Labour.

It said out of the many topics on the agenda, key topics to be discussed include the elimination of child labour as a condition for the positive labour market performance with human centered approach (education, skills development, lifelong learning and school to decent work transition, depending on the on the age groups; the high prevalence of child labour in agriculture, that is closely linked to poverty, informality and family survival strategies; the formalization of the informal economy and the creation  of decent work.

It said the conference comes in the form of plenary sessions, theme side event and outside excursions, multiple opportunities and various ways to meet, connect and accelerate activities for children.

The statement said more than 4,000 delegates were participating in the conference both virtually and in-person.

It said Ghana, as a member of the International Labour Organization (ILO), a beacon democracy with the protection of children on top of our development agenda was participating in this fifth Global Conference.

It noted that according to the ILO 2019 Global Report, more than an estimated 160 million children worldwide are engaged in Child Labour.

Adding that although the numbers were still rising, the surfacing  of the COVID-19 Pandemic seem to threaten the reverse years of progress on the menace , and there was a  clarion call for  nations to act now before it too late.

The statement said the Deputy Minister would be one of the seven panelists on, “Financing Elimination of Child Labour.”

It intimated that the panelists would discuss the required mechanism and framework to mobilize sustainable financing, improve coordination and strengthen partnerships between government, social partners, development partners, international financing institutions and the private sector.

It said the Deputy Minister would use the opportunity to discuss how Ghana’s National Plans of Action against Child Labour had supported coordination of efforts to tackle child labour, some implementation challenges and keys to successful coordination.

It said the Ghanaian Delegation would also participate in some of the side events of the conference to share lessons and experiences on the Child Labour Free Zones (CLFZs) concept, the Ghana Child Labour Monitoring system and the Hazardous Framework (HFW).