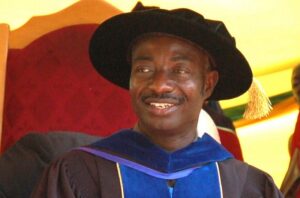 Dr. Samuel Donkor, President and Founder of All Nations University, Koforidua, says the university will soon open a campus in Accra to leverage its cutting-edge programmes, which include cybersecurity specialist training in Ghana.

He stated that the proposed Accra campus would assist in reaching out to more students, hence speeding up the training of more competent trained labour force for Ghana’s economy.

He said as the country transitioned to a digital economy, the university was also teaching cybersecurity specialists to combat cybercrime.

Dr. Donkor made the remarks at the launch of All Nations University’s 20th anniversary celebrations in Koforidua, Eastern Region.

The celebration is on the theme “Celebrating 20 Years of Quality and Innovative Higher Education in Ghana.”

“All Nations University’s cutting-edge and innovative programmes have made us the first university in Sub-Saharan Africa to design, build, and successfully launch a satellite for Ghana named ” GhanaSat 1,” Dr. Donkor said.

He stated that the university had become a prominent centre for small satellite research in Ghana and Africa, and that it was therefore spearheading a collaborative effort to teach other African Universities in small satellite development.

Dr. Donkor also highlighted some of the school’s accomplishments, including winning the Best Business School Award in Ghana as champions of the 2019 Standard Chartered Bank’s HR Focus Competition and the Best Engineering School Award from the Private Universities Students Association of Ghana in 2019.

According to him, All Nations University had evolved as one of the greatest universities in Africa during the last two decades as a result of the rigorous faculty development programmes the school had introduced.

The University has links and strategic relations with both foreign and local universities, assisting the institution in its global expansion of excellent education.

TUTAG urges government to honour agreement on condition of service