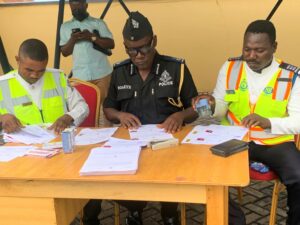 The Ashanti Regional Police Command has assured the public of its readiness to root out undisciplined motor riders, tricyclists and drivers in the region.

Deputy Commissioner of Police (DCOP) Boakye Afful Yiadom, the Regional Police Commander, said the actions of those recalcitrant drivers were a worry to society.

“We are going all out to arrest all those who jump the traffic lights, unlicensed motorbikes, riding of motorbikes between vehicles, those without crash helmets and those who ride on pedestrian walkways,” he said.

DCOP Boakye Yiadom was speaking to the media in Kumasi after issuing warning letters to some 91 motor riders who were arrested in the Greater Kumasi area between May 2 and 6.

They were rounded up at the Aboabo, Abrepo and Oforikrom intersections in Kumasi for not obeying traffic regulations.

The Police Commander advised the warned riders not to repeat such acts on the roads as the authorities would deal ruthlessly with those caught disregarding motor traffic regulations.

He said the exercise was going to be sustained throughout the region to promote sanity and safety on the roads adding that indiscipline, in whatever form, had the potential to cause accidents.

An Accra Circuit court has granted GH¢80,000.00 bail with three sureties to a Nation Builders …