During the 2016 election campaign, the current Vice-President, Dr Mahamudu Bawumia heralded a call – a move away from taxation to production, because, as he argued then, Ghanaians were being overtaxed.

He said, if voted into office, the New Patriotic Party (NPP) government would move the country away from taxation to production.

The NPP was voted into office. In the few months that followed the government did some cosmetic moves. It cancelled some taxes that it considered ‘nuisance taxes’ and created the impression that the government won’t impose new taxes, or at least so it seemed.

The government then introduced a mantra of moving towards the Fourth Industrial Revolution, giving the impression that it was aiming to industrialise the country, keeping to its promise of moving the country from taxation to production.

But with time the government faltered, and mismanagement sapped the momentum of the economy. It wasn’t long when the government’s borrowing hit the roof – exceeding 80 per cent of GDP. Lenders felt alarmed as debt unsustainability became clear. No one wanted to lend the country money. Stuck in its own incompetence, and ambivalence, the government was tottering, while it continued in mismanagement and profligacy, the COVID-19 pandemic hit, and rocked economies around the world, including Ghana. While a presidential jet in pristine condition was parked, the President continued to fly on a rented luxurious private jet at great expense to the country. As that goes on, government expenditure continued to skyrocket, even though the country’s reserves couldn’t last beyond a few months. 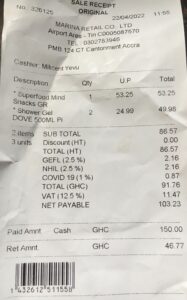 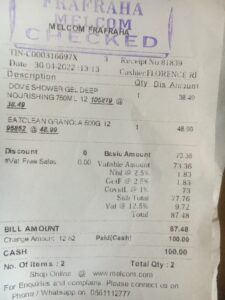 Stuck between a rock and a hard place, the government decided to inflict more economic pain on Ghanaians, by introducing the most regressive tax law ever thought of in Ghana in recent memory, the Electronic Transfer Levy Act, 2022 (Act1075) known as E-Levy, to be charged on all electronic transactions including Mobile Money. The unpopular tax came into effect on May 1. A cursory look on the timelines of Ghanaians on social media shows mixed reactions. It is also apparent that the government has released its army of communicators on social media to drown the genuine concerns of citizens about the new tax.

E-Levy, has the potential to roll back some of the phenomenal gains made with financial inclusion and would likely impoverish many more Ghanaians.

But while at it, there is apparently a somewhat bizarre tax which has been going on for a while on the blind side of most Ghanaians. The Value Added Tax (VAT) is being charged practically on other taxes.

Two receipts from Marima Mall and Melcom shared in this write-up shows that the basic prices of items bought are calculated and then charged the NHIL, GetFund Levy, and COVID-19 Levy. The subtotal of the cost including the other taxes is then charged VAT, but it does appear not many Ghanaians are aware.

Safety of Ghanaians is goal of government – Dery