April 20, 2022 Sports Comments Off on CAF disapproves Baba Yara Stadium for category ‘A’ matches due to poor standard 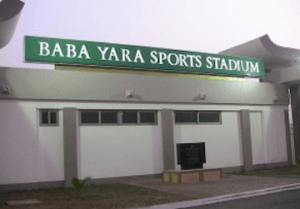 The Confederations of African Football (CAF), has disapproved the Baba Yara Sports Stadium in Kumasi from hosting senior category “A” matches due to poor maintenance of the stadium.

This decision was made as a result of the report received by the association over observations that were made in the first leg encounter of the Federation of International Football Association (FIFA) World Cup qualifiers between Ghana and Nigeria.

A statement signed by the Development Officer of CAF to the General Secretary of the Ghana Football Association (GFA), Mr. Prosper Harrison Addo said, “Following the one match approval given by CAF for the use of Baba Yara Sports Stadium (Kumasi) in the FIFA World Cup Qatar African Qualifiers 2022 playoff round matches under the conditions that specific points were to be corrected in the stadium”.

According to the Association, the improvements made so far to make the Stadium a better one still does not meet the standards required by CAF to host senior international A matches.

In the statement, the association announced its decision to prohibit using the stadium for senior international category A matches and also automatically removed from the confederations approved stadiums, but would only be approved for any subsequent CAF/FIFA International Senior national team matches and CAF Mens Inter clubs competition.

CAF further urged the stadium authorities to completely renovate and refurbish the stadium in order to be approved for future CAF competitions.

“We recommend that the renovation plan is based on modern architecture, contemporary design, and high-quality equipment and materials with a clear project plan and specific timelines in the off-field areas pointed out,” it said.

CAF finally made it known in the statement that all remarks and comments must be respected before the stadium would be given the go ahead to host any international senior CAF match.

The Ministry of Youth and Sports (MoYS), together with the National Sports Authority (NSA) would seek to work together in order to get the stadium back to CAFs category A list to host senior international matches.