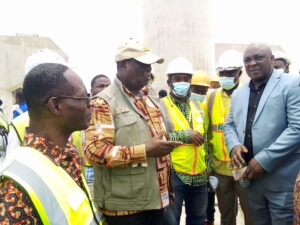 Mr Kwasi Amoako-Attah, the Minister of Roads and Highways, has directed the Departments of Urban and Feeder Roads to demolition all structures impeding construction work on the Nungua-barrier interchange.

The directive follows complaints by Mr Emmanuel Bonne Acquah, the Resident Engineer of China Railway Major Bridge Engineering Company Ltd, the construction firm working on the three-tier interchange, that some structures around the site were hampering the smooth progress of work.

These included a filling station, part of a chief’s palace, and unauthorised buildings cited on or around areas earmarked for the construction of the interchange and expansion of some adjoining roads.

Interacting with contractors and officials from the departments of Urban and Feeder Roads during a tour of the project site, Mr Amoako-Atta said such structures must not be allowed to continue to impede construction works.

He, therefore, ordered their immediate removal to fast-track work on the project to ensure early completion.

“Why are you tolerating such things? This project is for the benefit of us all including generations yet unborn and so why would we allow some few people to slow us down?” he asked.

“If they are within the right of way, clear them.”

The visit to the site formed part of the Minister’s tour of some road projects in Tema and its environs to obtain firsthand information.

The Nungua-Barrier Interchange is a three-tier interchange and forms part of the La-Beach Completion Project under the Accra Intelligent Traffic Management Project.

Mr Amoako-Attah commended the contractors for the work done so far and urged them to speed it up to bring relief to road users.

Giving details on the progress of work, Mr Acquah, the Resident Engineer, said construction was 40 per cent complete.

So far about 10km of dual carriage road had been constructed, with the remaining expected to be done in due course.

He, however, confirmed that they would not be able to complete the work on schedule due to challenges beyond their control, adding that they were working assiduously to minimise the impact the project was having on the residents and motorists.

Mr Acquah said evaluation of property earmarked for demolition had been concluded and very soon compensation would be paid to affected owners to pave the way for the Company to speed up work.

The Minister also toured some ongoing road projects in Tema Community 18 and 19, and Sakumono Estate.

Briefing the media after the tour, Mr James Amoo-Gottfried, Director, Planning and Development, Department of Urban Roads, said the Department was pleased with work done by the various contractors.

He, however, noted that it had identified a few problems including a poor drainage system at some sites, which the Department would immediately address.