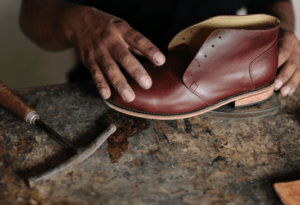 Over the years, the shoe factory has been producing safety and security boots and shoes for the country’s security services and recently expanded its production to cover specifications and designs suitable for Ghana’s shoe market.

The new designs were showcased at the company’s first showroom in Accra, Burma Camp after mass production started in 2018.

The Vice President, Mr Mahamudu Bawumia, in the company of the Madam Akosua Frema Osei-Opare, Chief of Staff, last week, inspected and inaugurated the Defence Industries Holding Company Limited (DIHOC) and cut sod for various projects under the holding of the Company.

He said such state and private sector collaboration was crucial in Ghana’s quest to enhance its economy.

Dr Karl Laryea, Chief Executive Officer of DIHOC Footwear Division Limited, said as part of efforts to revive the Kumasi Shoe Factory, the Company started the production of shoes and safety boots for the Ghana Armed Forces and other security agencies from November 2012.

The CEO said the Company was faced with some production difficulties as some of the rubber manufactured in Takoradi was bought from Europe because it was owned by a foreign company that shipped all its rubber to Europe.

He said plans were afoot to revive the “Achimota Sandals Policy” started by Dr Kwame Nkrumah in the 1960s where the Kumasi Shoe Factory produced sandals for school children, adding that there was a similar arrangement by the previous government to about 250,000 pairs yearly for deprived schools.

Reviving such an initiative, he said, would enable the Company to employ more workers to meet the increasing demands.

He said because leathers for production were not produced in Ghana but brought from India and sometimes Argentina, it would be prudent if the Government gave it some tax reliefs for a period of five years to enable them to produce the shoes at affordable prices for school children and the populace.

“If possible, we are also asking the Government to give us some Offtake Agreement for five years to enable us to produce for most of the security agencies. This will also help us bring our workforce to about 800,” he said.

Dr Laryea said when the factory started in the 1960s, Ghana’s population was about six million with a workforce of 1,800 then, so with a population of 31 million currently, a workforce of 10,000 would be needed to produce at full scale.

He said there was the need for the Government to protect the indigenous companies in its economic transformation agenda, and that there were plans to expand its production and penetrate the African market through the African Continental Free Trade Area (AfCFTA).