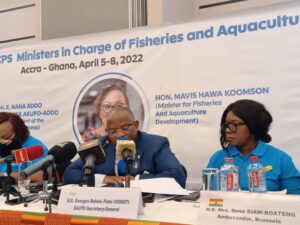 Seventy-nine member states of the Organisation of African, Caribbean and Pacific States (OACPS) have adopted a strategic plan towards combating the barriers that confront the blue economy and hinders sustainable fisheries and food systems.

Blue economy, according to the World Bank, is the sustainable use of ocean resources for economic growth, improved livelihoods and jobs while preserving the health of ocean ecosystem.

Member-states adopted the strategy at the 7th OACPS four-day meeting by Ministers in charge of Fisheries and Aquaculture, and Senior officials from varied African countries in Accra from Tuesday April 5, 2022.

The meeting was on the theme: “OACPS Blue Economy Agenda 2030 – Catalysing the Sustainable Fisheries and Aquaculture Development for the Future.”

Areas laid down for discussion were policy actions on preservation of maritime zone, impacts of climate change on marine and inland waters such as acidification, rise of ocean and temperature, sea level rise, migration of species, and financing from development partners.

Other areas addressed were combatting Illegal, Unreported and Unregulated (IUU) fishing activities, connection between IUU and organised crime and biodiversity and ways to sustain the marine-life value chain to yield nutritional and financial benefits for growth of member states.

Mrs Mavis Hawa Koomson, the Minister of Fisheries and Aquaculture Development (MoFAD), said it had become necessary to combat IUU as it threatened aquatic systems, marine and inland fishing, food security and a resilient sustainability of dependent communities.

Other areas that the Ministers considered were promotion of sustainable, inclusive, transparent and resilient aquaculture value chains, she said.

She noted that they were critical to ensuring food security and nutrition, livelihoods and wellbeing for the nationals, while also contributing to a sustainable blue economy.

Mrs Koomson said small scale fishing had been a key sector for the OACPS member states, hence, member States reached a consensus to uplift the sector and enhance their participation in decision making processes.

The Minister underscored the need to include the youth and women who were a sizable component of the small-scale fisheries value chain and yet were not always well represented, duly considered, appropriately recognised, and fairly treated.

She bemoaned the disproportionate vulnerabilities of member States to climate change, and the disaster risks that had caused havoc on their socioeconomic development.

“All member States call for enhanced access to capacity building and means to be able to adapt to and mitigate the impact of climate change and advocate to help shape the global ocean agenda,” she added.

Mr Georges Rebelo Pinto Chikoti, the OACPS Secretary-General, thanked the Government of Ghana for hosting the Ministers for the conference in the country to promote the fishery sector and aquaculture.

He expressed optimism that member States paid strict attention to the strategic plan to safeguard the blue economy and drive national growth and gave an assurance that the Secretaries of the OACPS would support the Ministers in the implementation of the strategic plan.

One of the reasons for the move was to control the migration of species and sustain the stock, he said.

At the OACPS meeting, Tanzania and Niger expressed interest to host the 8th OACPS Meeting of Ministers of Fisheries and Aquaculture to contribute to achieving the agenda of the meeting and enlighten Ministers on how aquaculture was done along a dessert nation, respectively.