Tidal waves: Residents of Anlo Beach to be resettled in two weeks

April 7, 2022 General News Comments Off on Tidal waves: Residents of Anlo Beach to be resettled in two weeks 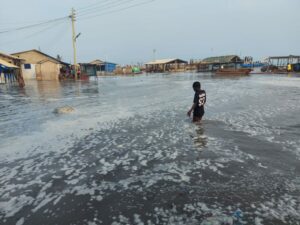 Residents of Anlo Beach, a coastal community in the Shama District of the Western Region who had many of their houses swept away by tidal waves are set to be resettled.

The Shama District Assembly has, thus, issued a two-week ultimatum for the victims to prepare for the resettlement.

This, according to Mr Ebenezer Dadzie, the District Chief Executive (DCE), had become necessary to avoid another possible havoc from the devastating waves.

He said the Assembly was poised to relocate community members to the land.

Anlo Beach, a community situated between the Pra River and the sea and predominantly fisher folks, have for the past decade lived under perpetual tidal attacks which has left about 80 per cent of its household washed away.

However, a proposed resettlement of the community had not materialized due to a dispute on the proposed site which was pending before a High Court waiting determination.

“The relocation has become necessary even though there is an ongoing dispute about the land, we have to make them understand that they need to solve their issue as to who owns the land after settling everything in court, the assembly and the government will engage the owners to formalize and sort them out, but now, it has become very necessary and urgent to relocate to avoid any future occurrences,” the DCE said.

“As we speak, we are clearing the new site so hopefully by next week they should move from here and settle on the new land to avoid any disaster,” he added.

Mr Ebenezer Dadzie further stated that the Assembly was partnering with investors to build modern and affordable housing for the community.

He advised the settlers to put up temporal structures as they wait for the Assembly.

The Director-General of the National Disaster Management Organization (NADMO), Mr Eric Nana Agyemang Prempeh, who visited the scene supported the victims with relief items and assured them of more support when the need arose.

He commended them for agreeing to resettle on the new land.

“I came here in 2017 and the community rejected the offer to relocate but am happy today you have agreed to relocate. Whatever we are doing now is short term, we can always present relief items to you,” he said.

Torgbui Galikor I, Chief of Anlo Beach explained that “about 150 houses are gone, as they have given us the green light to go, I am setting a leadership example so am going to relocate to the resettlement first”.