March 23, 2022 General News Comments Off on Leaves for food packaging are healthy – Dietician 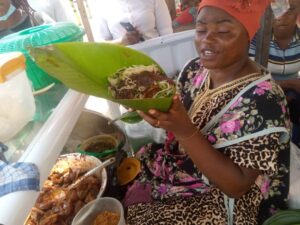 Mr Julius Sammah, a registered and licensed Dietician has encouraged the public to use local hygienic leaves to package their food because it has a lot of health benefits.

Leaves especially that of plantain and the katemfe plant are well-known alternative packaging materials that Ghanaians and other nationals have been using to wrap their foods for centuries.

Mr Sammah said the use of plastic and other materials for packaging hot food emitted some chemicals into the food which has health implications when consumed.

Speaking to the Ghana News Agency in an interview, he cautioned that “Chemicals such as Bisphenol A (BPA) used in the production of the plastic takeaways, through recycling processing, may leach into the food (especially hot food) and may be carcinogenic to the consumers.”

He added that the leaves were organic and therefore safe, noting that it also helps to maintain the initial temperature of the foods for some time.

Meanwhile, some local leaf sellers within the Tema Community One market have revealed that people were now buying the leaves to package their banku at home.

They noted that the leaves, which were known to be used mostly by food vendors for the wrapping of food, had been embraced by the people to package foods at home, a development they acknowledged as good.

Madam Jennifer Yeboah, a leaves seller, told the GNA that they get the leaves from the Volta and Ashanti Regions, where the katemfe tree was often found growing at the banks of water bodies.

Madam Yeboah explained that banku was packaged in the green leaves just as the food vendors packaged their waakye and rice.

She said people still buy the leaves despite its price and that a bundle of the leaves was sold at GH¢2.00 whereas three of such bundles were going for the price of GH¢5.00.

She urged the public to make good use of the leaves for their food packages, reiterating that they were medicinal and therefore better to be used than the plastics.

“Putting something with heat into the rubber can melt it and it is unhealthy for consumption,” she added.

Madam Amina Rahman, popularly known as Hajia, a waakye seller at Tema Community one, said many of her customers prefer the leaves to the polythene when buying food.

She said, “many like to buy my waakye in leaves due to the aroma it adds to the food”.

She noted that even though the leaves sometimes dried up when kept for a while, she would continue to sell with it so long as customers wanted their food wrapped in it.

Mr. Benedict Acquah, a customer at a food vendor stated that he enjoys his food better in the leaves than the rubber bags, saying, “Eating in the green leaves is the only way I know how to enjoy my waakye and beans”.

He added that “the aroma it gives the food is a different feeling altogether and I advise we go back to the old ways and say bye-bye to the rubber; after all the rubbers are causing more harm than good.”