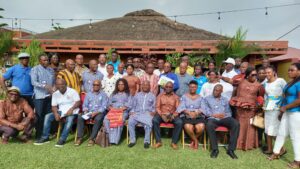 He said hotels had not recovered from the coronavirus pandemic that had led to business shutdown.

Mr Hotor speaking to the Ghana News Agency (GNA) on the sidelines of the First Quarter General Meeting of the association in Hohoe, said no member of the Association in the Region had received any grant from the government.

He said it was the Association’s hope that members would receive the grant as others have done.

Mr Hotor said some challenges affecting members were the nature of road networks in the region, which could hinder travel.

He said they also faced “harassment” from government institutions such as the Assemblies, Ghana National Fire Service, Ghana Revenue Authority and the Environmental Protection Agency with regards to many payments although they were facing challenges.

He said there was a need to ensure a good maintenance culture of hotels’ structures and facilities.

Mr Awume said there was a downplay on training key staff of some hotels for fear of losing the staff and urged them to organise training and re-training workshops and programmes for their staff to offer their best to customers even if they no longer work with the facilities, they received the training.

Mr Awume admonished members of the GHA to also attach importance to their service delivery to customers since it had the tendency of referrals.