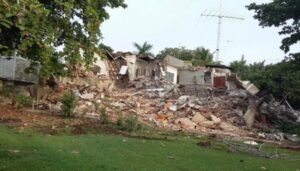 The government has directed a private developer, one Dr Yaw Adu Amponah, to stop work on the land leased to the Bulgarian Mission in Accra.

The notice was served on Dr Ampomah through the Ministries of Land and Natural Resources (MOLNR) and the Foreign Affairs and Regional Integration.

Mr Benito Owusu Bio, the Deputy Minister of Lands and Natural Resources at a media briefing on Wednesday instructed the developer to stop work on the property with immediate effect.

The Deputy Minister who led a team of journalists to visit the said property together with the Deputy Minister of Foreign Affairs and Regional Integration, Technical Director for Lands and other official, on Wednesday, in Accra, said the developer forcibly took over the property despite several warnings.

Speaking to the Media after the visit, Mr Owusu Bio said the Ministry was petitioned by the Bulgarian Embassy stating that they had a lease on the facility, which would expire in ten years.

He said furtherance to that, steps were taken, including the Lands Commission placing notices for construction work to stop on the project but they were not heeded.

The Minister, said “in the interim, nobody must be seen working on the said land, because there was an ongoing court litigation between the Embassy and the developer.”

He noted that as citizens “we must be law abiding, and the Commission has every right to stop any developer from developing illegally. So if the developer has any issues, he should come to the Ministry.”

He said “we know the history and have been involved in this matter over the last few months. I have been here to issue notices for them to stop work, but they have disobeyed. We have held series of meetings with the developer and his lawyers and so we have done a lot of discussions. But the developer has accelerated with the rate of work, which is not the best thing to do.”

“What has triggered our reaction to issue this warning is based on comments made by the opposition, and we feel we owe the people of Ghana some explanations. The developer is not backed by any government authority,” he emphasised and asked the developer to heed to the warning and stop work to prevent any further actions from government.

Mr Maxwell Adu Nsafoa, Technical Director, Lands Commission, said the property was a Government of Ghana land leased to a third party and given to the Bulgarian Embassy, who occupied it until the Embassy was moved from Ghana, but the Mission still had 10 more years on the lease.