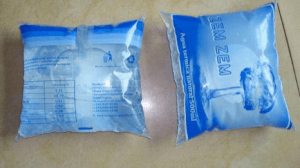 Sachet water is the main source of drinking water in the country, overtaking pipe-borne water, the 2021 Population and Housing Census (PHC) figures revealed.

Professor Samuel Kobina Annim, Government Statistician, presenting the highlights of the Census report on Water and Sanitation on Thursday in Accra, said borehole or tube well water recorded a figure of 17.7 per cent in 2021 and 23.2 per cent for the 2010 Census figures.

In the report, the Government Statistician revealed that nine in 10 households, representing 92.0 per cent had access to improved sources of drinking water, with the proportion higher for urban (97.8 per cent) than rural (83.0 per cent) households.

The report shows that at least 90 per cent of households in nine regions have access to improved sources of drinking water, out of which Greater Accra recorded (98.3 per cent), Bono (97.5 per cent) and Upper West (97.3 per cent) have the highest.

Four in five households, representing 79.9 per cent using unimproved sources of drinking water rely on surface water (river/stream/dugout/pond/dam/canal), in the 10 regions, with the highest in the Oti Region, representing 98.1 per cent.

In Greater Accra Region, the dominant source of drinking water is tanker service, representing 78.8 per cent, while unprotected wells and springs dominate in the Upper East Region of 54.9 per cent.

The report revealed that less than five per cent representing 4.2 per cent of households have access to improved sources of drinking water beyond 30 minutes (limited service) and that the proportion was higher in rural (8.6 per cent) than in urban (1.4 per cent) areas.

Touching on toilet facility, the report shows that in all 16 regions, open defecation was prevalent, with five regions recording more than 50 per cent.

For households without toilet facilities, 90 per cent or more of households’ point of defecation is bush, open field or gutter in all regions, except in three-Central, Western and Greater Accra- were 10 per cent or more use the beach or the water bodies.

Mrs Cecilia Abena Dapaah, the Minister of Sanitation and Water Resources, responding to the figures commended the Ghana Statistical Service for conducting the Census, despite the COVID-19 pandemic.

She said the United States committed $45.5 million over the next five years to improve water, sanitation, and hygiene (WASH) services in the country during the launch of a water project in Tamale.

She stated that the Government vision was to have water for all to meet the Sustainable Development Goal Six, that “seeks to ensure safe drinking water and sanitation for all, focusing on the sustainable management of water resources, wastewater and ecosystems, and acknowledging the importance of an enabling environment.”

The provisional figures from the 2021 PHC indicate that there are 30.8 million people in Ghana, compared to 24.7 million people recorded in the 2010 Census.

The 2021 PHC counted and collected detailed information on all persons that spent the Census Night, that is Sunday 27th June 2021 in Ghana, and ended the exercise on August 15, 2021.

The Census will provide important information to support the evidence-based implementation of the national development agenda and support the tracking of achievements of the Sustainable Development Goals and Agenda 2063 of the African Union.