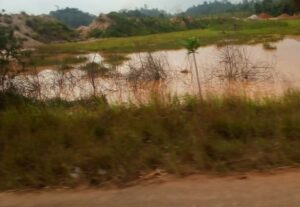 The Western South Manager of Cocoa Health and Extension Division (CHED) of Ghana Cocoa Board (COCOBOD), Mr Samuel Ankamah, has urged the government to intervene and stem the destruction of Cocoa farms for illegal mining activities in the Wassa-Amenfi and Wassa-Fiase traditional areas.

He said the situation posed a serious challenge to the future of the cocoa sector and a drain on the Gross Domestic Product (GDP).

The CHED Manager said original landowners entered into agreement with illegal miners for peanuts without the consent and approval of the cocoa farmers.

“Cocoa farms are being destroyed in broad daylight for illegal mining activities against the will and acceptance of Cocoa farmers”.

Mr Ankamah noted that the Dadieso community was worst affected by the action of the illegal miners.

He said mining activities were on-going at the backyard of people’s residence in the Dadieso community.

He said the illegal mining menace had reached an alarming proportion to the extent that houses were being pulled down for mining.

The situation, he noted,had left the town with many  pits, posing danger to people.

He expressed worry that the Cocoa industry earned the nation a chunk of foreign exchange, yet the industry was now saddled with the illegal mining menace.

Mr Ankamah was unhappy about encroachment on virgin lands earmarked for buildings and other projects for future generations.

Mr Korankye told the GNA that the District Security (DISEC) Council had put in place measures to clamp down on illegal miners, but it had been difficult to halt the illegality, which is affecting land and river bodies.

Mr Korankye noted that many cocoa farmlands in swampy areas were easily sold out to illegal miners and appealed to cocoa farmers to halt the practice and adopt innovative ways to reclaim cocoa farms in swampy areas to ensure that cocoa trees were not affected.

The MCE said extension officers would continue to educate farmers whose cocoa farms were in swampy areas not to sell their farms.

Mr Korankye appealed to Ghanaians to patronize cocoa-related products to give cocoa production a boost.