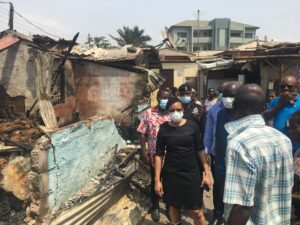 A household at Osu, opposite the former SIC Club House, was on Thursday dawn burned down by fire, leading to the complete destruction of over 15 houses, displacing 100 people.

There was no casualty.

Mr Francis Tamakloe, one of the victims told the Ghana News Agency that the fire started at 0230 hours and after some 15 minutes, they called the Ghana National Fire Service (GNFS).

He said the GNFS delayed operations for over 15 minutes for the Electricity Company of Ghana (ECG) to take out power in the area.

Mr Tamakloe alleged the delay led to the escalation of the fire to other apartments and called on the government, the National Disaster Management Organisation and philanthropists to come to their aid.

The GNA observed that all15 houses were razed with serval items charred beyond salvage.

Some of the destroyed items include clothes, furniture, household appliances and kitchenware.

UTAG agrees, in principle, to call off strike