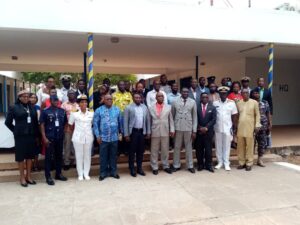 Dr Jethro W. Brooks Junior, the Acting Vice Chancellor of the Regional Maritime University (RMU), says there was the need for enhanced cooperation and coordination of efforts to deter and interdict the criminals at sea.

He said the incidence of kidnap for ransom remain the most significant risk to mariners, especially within common maritime borders and zones within the Region.

Dr Brooks said this at the opening of the second Cohort of the Maritime Affairs and Security Course in Accra.

The training is aimed at building capacity and competences of staff and personnel of the maritime focused agencies and institutions across the West African Region to combat crimes in the Gulf of Guinea.

The course is part of the Support to West Africa Integrated Maritime Security (SWAIMS) Project.

The specific objectives of SWAIMS are to improve regional Governance and legal frameworks prosecution and adjudication of maritime crimes, law enforcement operational capacities, regional training and responses to the threats and transnational cooperation.

He said the growing maritime insecurity has, therefore, affected the legitimate use of the sea, impaired the exploitation of coastal resources and contributed to undermining regional security as well as the realization of the blue economy potential of the Region.

The Acting Vice-Chancellor said an analysis of the maritime insecurity situation in the region revealed that the Gulf of Guinea was deficient in coordinated and collaborated maritime law enforcement capabilities and capacity at national, zonal and regional levels.

“This situation has created gaps in the region’s response process to the benefits of the criminals,” he added.

He said in furtherance of the SWAIMS project, the RMU was selected for training sea actors, naval and law enforcement officers across English speaking West Africa.

The Vice-Chancellor said the Course had been packaged and reviewed taking the lessons learned from the past into consideration and would be delivered with the objectives of the ECOWAS Integrated Maritime Strategy in focus.?

Dr Brooks said the training would be delivered by a team of experts and facilitators drawn from maritime industry, defense and security, shipping and fishing industry, the academia and research institutions.?

He said the training and coaching was tailored to enhance their individual and team practical functional knowledge and competencies.

Dr Brooks urged the participants to seize the opportunity to network and build trust for better coordination and information sharing.

He said training would involve simulation practices to enable them to apply it to real-life situations where the trainees return to their various destinations.

Mr Addy-Lamptey said the programme was for four years aimed at training about 72 participants within the period, and that this year was the second made up of 18 trainees from the six English speaking countries in West Africa.

The Programme is an European Union funded project to combat Robbery, Killing, Kidnapping and other Maritime crimes.