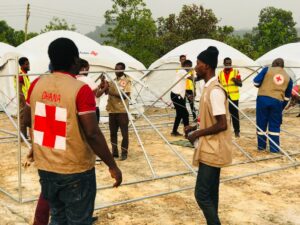 The NADMO officials working at the Appiatse camp have called for more tents to reduce congestion in the camp as a result of the explosion.

The current population at the camp stands at 800 with victims being housed in 38 tents, a situation that is affecting the living, relationship and family life of people affected by the January 20th explosion disaster.

Some camp dwellers the GNA interacted despite their gratitude to all Ghanaians for the massive support, called for improvement in their night lives.

Meanwhile, NADMO officials at the camp have confirmed the situation and assured that more tents would be made available to solve the situation.

“Churches and organizations must begin helping to build the emotions of these groupings.”

Mr Afful noted the people become dejected after people have visited them, hence, the need for constant emotional support.