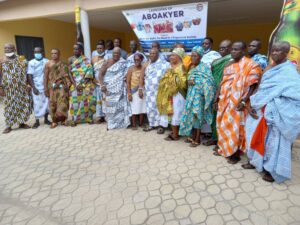 The 2022 Aboakyer Festival of the chiefs and people of Effutu has been launched with a call on the celebrants to be circumspect in their actions in order not to mar the beauty, peace and success of the festival.

The festival, which commences on Saturday, April 30, with a sanitation project, will be climaxed on May 7 with a grand durbar.

Neenyi Ghartey VII, the Paramount Chief of Effutuman, who launched the festival, enumerated the unique tradition bequeathed to them by their ancestors to keep the religion and culture of the people sacred.

He said the weeklong festival was also of economic importance, which would help tourism to flourish as well as comprehensive entertainment, including sports.

To boost tourism, the tourists would be allowed to freely participate in all the customary practices with the Asafo companies while the sponsors would have the opportunity to sell their products.

Neenyi Ghartey said the culture and social values of the festival included its unifying force and the rebuilding of the confidence among the people of Effutu.

He, therefore, called for the full participation of the people to contribute their quota towards a peaceful and successful festival, saying the COVID-19 protocols must be strictly observed for people to avoid contracting the disease.

Activities earmarked for the celebration from April 30 to May 6, include a Gospel Musical Night, general clean-up and consecration of the shrine, football tournament, Aboakyer Food Bazaar, and parading of deities by Tuafo Number 1 and Dentsefo Number 2 Asafo companies through the streets of Winneba.

On Saturday, May 7, a grand durbar will climax the festival after a deer hunting in the morning by the two Asafo companies.