Stakeholders urged to do more to protect wetlands in Ghana

February 9, 2022 General News Comments Off on Stakeholders urged to do more to protect wetlands in Ghana 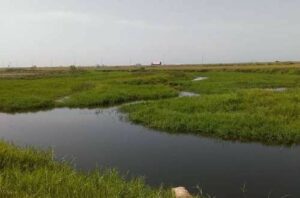 Stakeholders championing environmental issues in Ghana have been urged to do more to safeguard wetlands from being converted into other uses.

Mr David Kwarteng, Director of Institute of Nature and Environmental Conservation (INEC), said wetlands were very important because they stored a lot of carbon which mitigated climate change and its impacts.

Additionally, wetlands were breeding sites for different types of animals especially, for migratory birds that traveled from Europe to Africa each year and the more wetlands were destroyed, the diversity of life would no longer be found in our soils.

Mr Kwarteng, speaking to the Ghana News Agency (GNA) in Kumasi, said urbanization had been a major problem in protecting wetlands in Ghana and explained that these lands were meant to collect rains and gradually sink into the earth to prevent erosion.

He observed that the frequent flooding in Accra and Kumasi were mostly due to the fact that wetland zones had been converted into built areas.

The Director cited vast wetlands around Dakwodwom, TUC, Santasi and Ahodwo in Kumasi and an area at Sakumono Lagoon Ramsar sites in Accra that had been used for construction.

“These are the very places liable to flood when there is a huge downpour in Accra and Kumasi”, he stated.

Mr Kwarteng indicated that wetlands were not waste lands and called on Ghanaians to desist from dumping refuse in such areas and other river bodies.

He was optimistic that if the Environmental Protection Agency (EPA), Lands Commission, Water Resources Commission, and non-governmental organizations executed their functions well, wetlands would be protected and preserved for its natural purposes.

“If we rewet, reforest and restore our wetlands, the ultimate benefits go to people and the life forms that depend on the wetlands”, he stressed.

Mr Kwarteng said the INEC was on course to plant more tree species to reforest and restore wetlands in Ghana adding that, the organization had already nurtured and planted almost 80,000 tree seedlings.