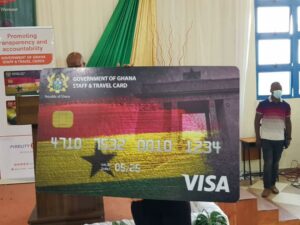 The Vice President, Dr Mahamudu Bawumia has launched the Government of Ghana Staff and Travel Card (e-travel card), designed to promote transparency and accountability in the management of funds during travels by public officials.

The card will replace all manual systems of managing imprests in the public service in a bid to promote transparency and accountability and make it easy for the cashless disbursement of travel and other related funds by government and all other public officials.

All government office employees will receive a personalised card, which will enable their travel expenditures to be tracked and monitored as part of the implementation process.

The new platform comes on the back of several digitalisation initiatives undertaken by the Controller and Accountant General’s Department (CAGD) including the Ghana Integrated Financial Management Information System and the Electronic Payslip system.

The Vice President launched the card at the end of the three-day annual conference of CAGD held in Cape Coast on the theme: “The Role of CAGD in Advancing the Digitalisation Agenda of Ghana.”

Launching the card, Dr Bawumia observed that the manual system currently in place provided an avenue for some public officials to engage in overspending and fraudulent activities with impunity when they embarked on official travels.

He said the e-travel card would, therefore, enable the CAGD to “strengthen monitoring and control of budgetary allocations for official travels to avoid overspending”.

“It will eliminate risks with cash transactions for official travels and cash disbursements and eliminate the misapplication of funds, over expenditures and fraud associated with imprests,” he added.

The Vice President observed that the world was increasingly tilting towards cashless economies and systems and urged the affected public to embrace the new platform.

“It is important that we move toward e-travel cards to make sure that we can engage in transactions freely when we travel,” Dr Bawumia stressed.

He commended the Ministry of Finance and the CAGD for their efforts in keeping the digitalisation agenda of government alive.

The Vice President appealed to the public to do their maximum best they could to position the country in a better situation, adding the everyone had a crucial role to play.

“Let us maintain at all times, quality corporate attitudes, transparency, professionalism and patriotism in the discharge of our duties,” he added.

For his part, the Controller and Accountant General, Mr Kwasi Kwaning-Bosompem intimated that the introduction of the e-travel card was in line with the mandate of his outfit to protect public funds.

He said the card was intended to “operationalise provisions in the public financial management act (act 921) and the regulations relating to imprest management.”